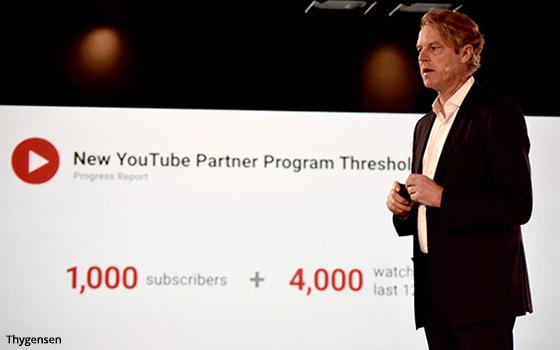 Google's dominance among advertisers means it is a critical player in helping brands reorient around the customer journey. Google's Allan Thygesen appeared at Monday's 4As' Accelerate Conference to outline how his company is committed to working with agencies to build and strengthen an advertising ecosystem that works for agencies, brands and consumers.

"At times, Google has fallen short," he admitted. "Underlying this belief is that healthy ad ecosystem must be transparent, trustworthy and valuable."

Google is trying to do a better job communicating its commitment through three new initiatives, beginning with an appropriate and ad fraud-free environment. A year ago, YouTube policies were not working well, he says, alluding to its well-documented scandals.

Since then, Google has "made progress," including starting an alliance with more than 150 NGOs and academics to identify inappropriate content.

Google also hired 60% of its new batch of trust and safety employees, with more than 10,000 people scheduled to be on board by the end of the year.

Google's Preferred Lineup program will run ads only on videos that have been 100% verified, which has been made easier through new content eligibility guidelines that tightened the threshold of participants.

In 2017, Google took down 3.2 billion bad ads, five times more than two years ago. This meant 100 bad ads per second were prevented from being viewed by consumers.

In addition, Google is working with the Interactive Advertising Bureau (IAB) and the Trustworthy Accountability Group (TAG) to develop invalid traffic policies. It's also agreed to new policy in which 99% of available DBM inventory is covered by invalid traffic media refunds.
"All of this doesn't matter if you can't trust the media placement," says Thygesen.

Google is partnering with "choice" third-party verification providers, including Neustar and Nielsen, to break down research and insight gathered by channel and device. Most marketing mix models don't often account a detailed look at digital, which isn't helpful or accountable, he says.

The search giant will also introduce a new reach planner, based on the platform's internal scheduling, to visualize campaigns and drive better key performer indicators.