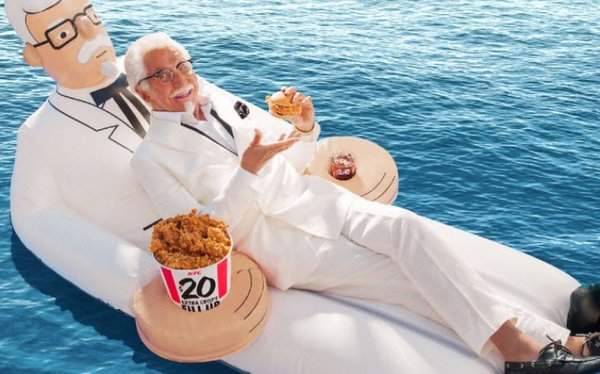 This time, the perennially suntanned 78-year-old actor — who was tapped to launch the Extra Crispy version in 2016 — is pitching a new menu item: a breaded chicken filet sandwich dubbed the “Crispy Colonel.”

In the first new 30-second TV spot (below), to begin airing this Sunday night (April 22), Hamilton gets to sing, in a fashion, aboard a party yacht christened “The K.F.Sea.”

Other creative includes a five-second teaser showing Hamilton, in full colonel regalia, relaxing out in the ocean on a float made to look like Colonel Sanders.

The sandwich is being positioned as a portable version of KFC’s Extra Crispy chicken ideal for on-the-go eating as folks enjoy outdoor summer activities.

The campaign’s launch release suggests that, because the sandwich can be consumed with one hand, KFC fans can use the other hand to snap or ‘gram photos of themselves “living the Extra Crispy lifestyle,” steer a yacht, or “rub on some Extra Crispy fried chicken-scented sunscreen.” (That sunscreen was actually offered online for a time last summer.)

The sandwich will be available in KFC’s original recipe and its three southern-inspired flavors, starting April 23. The brand says that it will also introduce a surprise flavor during the summer.