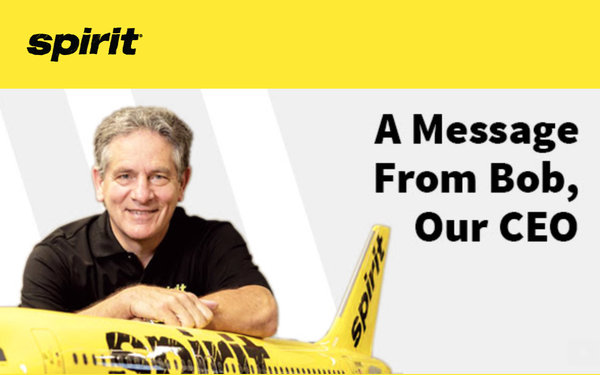 Spirit once again used a direct-to-consumer email to its customers to communicate news at the budget airline.

Chief Executive Officer Bob Fornaro previously wrote an email to customers last May to do damage control over some PR blunders at the airline.

“I'm thrilled to share our continued improvements to our airline,” Fornaro wrote. “When I last wrote you, I was excited to share our operational improvements and technological enhancements. I'm proud of all that we've done to improve your experience so far, and we're not done yet.”

Fornaro said he hoped customers have had a chance to use the airline’s updated website, Spirit Check-in app, and the new check-in kiosks across its network.

“Since these initiatives have launched, we've continued to innovate and update them to better serve you,” he writes. “We recently unveiled our latest initiative: self-tagging for checked bags! This newest advancement is rolling out at airports across our network by summer and allows you to have more control over your check-in experience on our new kiosks. “

Spirit takes “great pride” in caring for bags and its numbers prove it, he notes. In 2017 the airline ranked number one in the industry for baggage handling.

“We've doubled down on our operation and it continues to perform spectacularly, too: Spirit has ranked among the top airlines for on-time performance for the past seven months,” he says. “To continue our rapid growth, we've added 12 brand-new planes to our fleet in the past six months, with 10 more on the way this year. Our Fit Fleet continues to be the youngest in the skies.”

“Over the past few years we've accomplished so much, and I'm so grateful for the amazing team I've worked alongside,” Fornaro says. “I’m pleased to share that Ted Christie was recently promoted from CFO to President, and he will take over my role as CEO in 2019. Soon you'll begin to hear about Ted's dedication to the guest experience and what he has planned to continue our focus on improvement.”