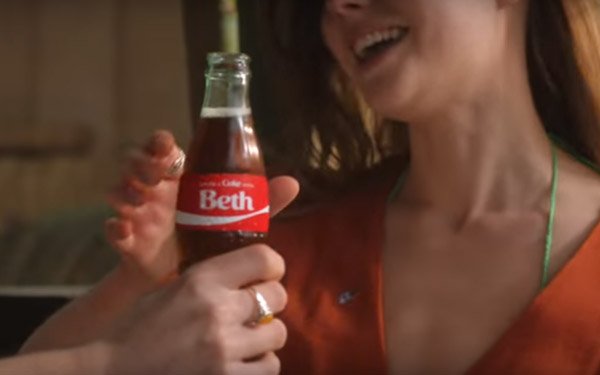 Coca-Cola and a team of agencies are launching the beverage brand's "Share A Coke" summer promotion and campaign with several new innovations.

For the first time, “Share a Coke” name labels on 20-oz. Coke bottles are stickers. Fans peel off the stickers to reveal Coca-Cola’s Sip & Scan codes that instantly enter them to win prizes ranging from a free Coke to amusement park passes.

“In years past, we’ve found that once the campaign ends, people want to hold on to a memory,” stated Jaideep Kibe, vice president, Coca-Cola Trademark, Coca-Cola North America.

The ShareACoke.com website lets visitors purchase personalized 8-oz. glass bottles as well as customize bottles with two lines of text, share “social postcards” with friends and family, and search to find their names in stores.

The beverage brand is also aligning with social media influencers as part of the Share Chair, an oversized armchair that doubles as a “shareable” vending machine. When two people sit together at the activation, personalized mini cans of Coca-Cola and Coke Zero Sugar are "vended" through the chair’s arms. Then, a strategically positioned camera captures the moment to provide fans with a photo and video that are intended to be shared on social media.

The Chair will travel across the U.S., appearing at summer events including the BET Experience in L.A., Special Olympics USA Games and the Major League Baseball All Star Game in Washington, D.C.

Since Coca-Cola first debuted Share A Coke in the U.S. in 2014, the campaign has evolved and expanded, including adding new names and song lyrics. In addition to the social and on-pack support, this year the campaign includes radio, outdoor and cinema advertising.

“That first year [in 2014], it was all about discovery and introducing people to the idea that they could find their names – or the names of their friends or family members – on a Coke bottle,” stated Saxon Seay, brand manager, Coca-Cola. “But over the years, it has become more about the experiences and moments shared over a Coke.”