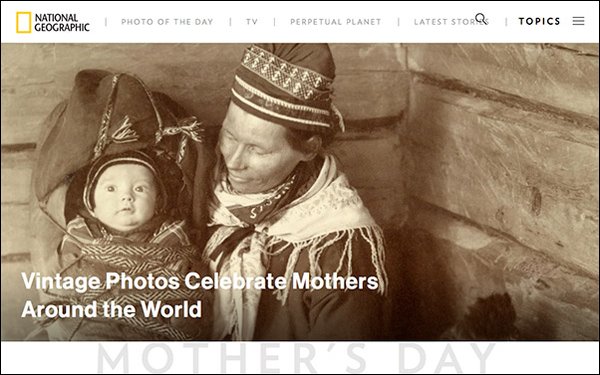 National Geographic was ranked the top social brand for the fourth year in a row by social-media data and analytics firm, Shareablee.

It has been the top brand on Instagram since 2014.

It is also the most followed media brand on social platforms, with more than 420 million followers globally.

A video of a jaguar pulling a small alligator (called a caiman) out of a river in December, for example, received 1.7 million actions and was the top Instagram video by any brand for the year.

Jonathan Hunt, senior vice president of digital content and audience development for National Geographic Partners, spoke to Publishers Daily about the 130-year-old legacy brand and how it has been able to transform the coverage in its iconic magazine, website and TV channel to top the charts on social platforms.

“Access to amazing explorers, scientists, photographers and to new places — all to help you better understand and care for the world around you,” he said.

Visual storytelling has been “core to our DNA for over 100 years.”  That can span across video, virtual reality and 360 formats, beyond photography, adding: “360 over-performs for us on platforms like YouTube and Facebook."

But it’s not just the visuals that attract users to National Geographic’s social accounts, he noted. It’s the storytelling behind the visuals. “While visuals are important, another reason why people follow us on Instagram is for the captions, not just the photography.”

Captions under National Geographic’s Instagram posts typically tell the story behind what it took to capture the photo, such as the trials and tribulations the photographer went through to get that final shot.

National Geographic is “shifting away from strictly talking at people to talk with people,” Hunt said. Social-media platforms can serve as a “facilitator of dialogue with our audience," on key topics like science and innovation, travel, culture, exploration and animals.

National Geographic has found success in reaching out to its audience on Reddit, an unusual but increasingly popular discussion platform for media brands to connect with communities around specific areas of interest.

National Geographic hosts regular “AMAs” (which stands for “Ask Me Anything,” where Reddit users can ask a host questions and get answers in real-time) with its photographers and explorers. National Geographic moderators will also encourage the Reddit community to propose new story ideas for the media brand and give the group sneak peeks at content before releasing it publicly.

Sponsored content is an “important part of our revenue,” and social posts can direct users to Nat Geo’s businesses, like its expedition tours and consumer products, such as its DNA ancestry product Geno 2.0 and its books.

Instagram Stories, in particular, can be used “as a sort of mechanism for pushing people down the funnel.”