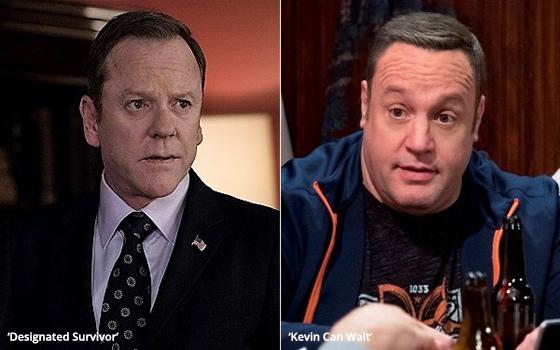 A year from now, how many of the new shows the networks announced with so much fanfare at the upfronts this week will still be on or even remembered?

For example, does anyone remember “Ten Days in the Valley”? That was the Kyra Sedgwick drama on ABC that was probably the most depressing show on network TV all season -- the story of a woman in Hollywood, an alcoholic and drug addict, whose young daughter went missing.

It was one of many shows on the Big Four networks that did not make it onto the fall lineups. Instead, they were cancelled, with little or no attention paid to their passing.

That stands in stark contrast to the way these and other new shows are developed and promoted every year -- each and every one of them promoted like they are the greatest shows on earth. Then, when they get cancelled, the networks have nothing to say about them.

In addition to “Ten Days in the Valley,” ABC dumped “Alex Inc.,” the sitcom starring Zach Braff that lasted only a few weeks this spring; “The Crossing,” a very short-lived drama (also this spring) that had something to do with eerie goings on in some sort of windswept beachside community; “Deception,” the recently introduced cop-magician drama; “The Mayor,” about a young African-American who is elected mayor of a small city almost by accident; and “Kevin (Probably) Saves the World,” a drama series that was a cross between “Touched By an Angel” and “Oh, God.”

They were all first-season shows. ABC also cancelled “Designated Survivor,” in which Kiefer Sutherland played the president of the United States; and “Quantico,” the FBI drama.

Sutherland was one of two formerly sturdy TV stars to get the axe this spring. The other was Kevin James, whose CBS sitcom “Kevin Can Wait” was cancelled.

CBS also dumped the tech-genius dramas “Scorpion” and “Wisdom of the Crowd,” and the comedies “Superior Donuts” (whose comedy was not superior), “Living Biblically” (thank God) and the dreadful “9JKL,” quite possibly the season’s worst show on any network.

NBC's cancelled shows all richly deserved it too. They were: the high school musical drama “Rise”; the military drama “The Brave”; “Shades of Blue,” the Jennifer Lopez and Ray Liotta cop drama; the hospital drama “The Night Shift”; and “Taken,” adapted from the Liam Neeson movie series.

You can be forgiven if you had not heard of most or all of NBC's cancelled shows. That’s the nature of TV today (even more so than yesteryear) -- shows come and go with such astonishing swiftness and frequency that most of them seem to pass before our eyes almost (or completely) unnoticed.

Fox cast out its devil shows “Lucifer” and “The Exorcist” and the three sitcoms that were reported cancelled last week -- “Brooklyn Nine-Nine,” “The Mick” and “The Last Man on Earth.”

Suffice it to say that more than a few of the new shows announced just this week will be similarly swept away by the time upfront week rolls around next May.

Based on the clips seen at the various upfronts this week, my candidates for the shows most likely to never see a second season include at least three on ABC -- “A Million Little Things,” a drama about how a group of friends reacts when one of them kills himself (next season's most depressing show); “The Fix,” a drama created by Marcia Clark based very loosely on her experience as a prosecutor in the O.J. Simpson murder case (in this one, she gets a second chance to put him on trial); and “Grand Hotel,” a prime-time soap no one will watch.

On CBS, the most likely fails are the new “Murphy Brown” (put this show to its eternal rest already) and “God Friended Me,” a comedy about a man who is “friended” by God on Facebook. About that last one: It is almost as if someone had a meeting with CBS to suggest this idea as a joke or a prank, and CBS thought it was a real idea, and good enough to actually go and do. Good heavens.

The worst of all the shows seen at the upfronts, judging by the clips, was the one called “The Cool Kids,” coming to Fox next fall. This one is sort of a “Golden Guys” with a trio of randy oldsters making merry in a retirement home.

Watching a clip of this show at the Fox upfront this week had me wondering if network TV was finally ready to call it a day and retire too.