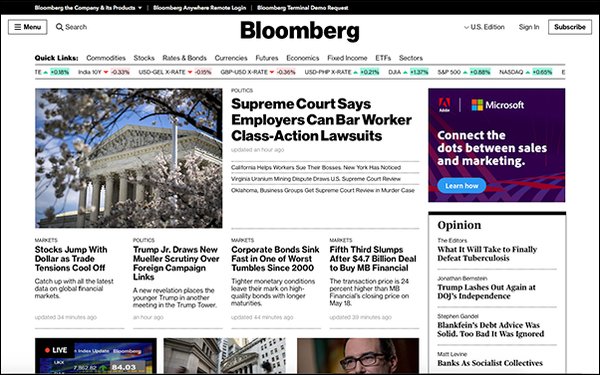 “We’ve always had excellent coverage [of these topics],” Sandberg said, but the verticals needed their own dedicated areas on the website to shine. The categories have “always deserved web presence more befitting than what has been given to them in the past,” he said.

“People aren’t using big navigation menus as much as they thought they would,” he said, and landing pages “don’t necessarily drive traffic. But we have really committed users. We can do things for those subsets of readers,” Sandberg said.

Bloomberg’s redesign and content hubs aim to make it easier to find relevant content and make the site more navigable. A story can scroll into the section where it lives, for example, so a reader can find more editorial related to that story.

“We do view an article almost like a section front, and we do think about recirculation,” Sandberg said.

In an internal memo about Bloomberg’s redesign, Justin Smith, CEO of Bloomberg Media Group, and John Micklethwait, Bloomberg editor-in-chief, said the redesign is “built with utility and mobile in mind and designed to help improve users’ access to our content. We’re completely rethinking how our content is delivered to make it more essential and useful. “

The new hubs will get more staff devoted to those hubs now, too.

Bloomberg Wealth is built from Bloomberg’s existing Billionaires and Pay teams, as well as reporters who cover family offices, the art market, philanthropy and personal finance.

The Pay team covered compensation and could analyze data from companies to see if CEO compensation was proportional to the returns and the growth of their staff.

Bloomberg Wealth will now cover how the wealthy manage their money through family offices and spotlight big donations through the Philanthropy Tracker. It also features the Bloomberg Billionaires Index, which tracks the 500 individuals who control more than $5 trillion.

Bloomberg View and Gadfly (which focused on business commentary) are being rebranded and brought into one hub as Bloomberg Opinion. It is the new home for all of Bloomberg’s opinion columns, editorials and analysis. Opinions published are organized around six pillars: Business, Finance, Markets, Economics, Politics & Policy and Technology & Ideas.

Contributions from the editorial board and Michael Bloomberg will be displayed in a section on the homepage called "The Bloomberg View."

The new hubs will join the recently launched verticals Crypto, Hyperdrive and Climate Changed.These hubs can be monetized with opportunities like sponsored landing pages, and we have interest, Sandberg added.

Bloomberg also announced new subscriber-only regional newsletters, The Bloomberg Open and The Bloomberg Close, across Asia, Europe and the Americas. The newsletters can offer more value to Bloomberg's paying members.

“They are forms of premium content to make sure [subscribers] are getting the most for their money, and we are quite committed to that,” Sandberg said.