Roseanne Is A Twitter Addict Whose Life Has Become Unmanageable 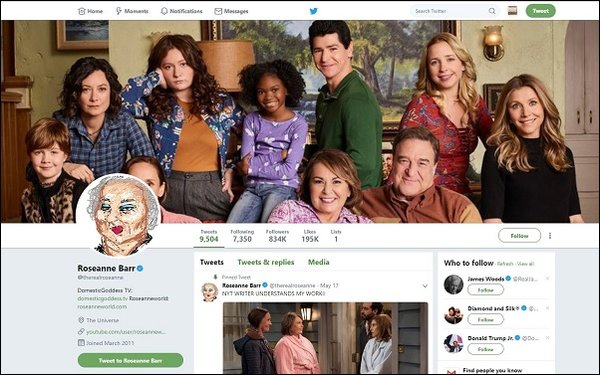 If Twitter is not by now the world’s best-known brand, then I don’t know what is.

No other company name gets mentioned in the media as many times a day (or per hour or even per minute) as Twitter.

It is the focal point, basis or at least a part of so many stories in the news every day that its presence has fundamentally changed the nature of the journalistic process itself.

Twitter is now one of the first destinations many journalists visit in their search for stories as their workdays get underway. As a result, dozens of stories every day are about Twitter and the outrage it produces.

In the bodies of those stories, numerous tweets are always quoted, often from sources with fictional names who are decrying the tweets posted previously by others -- often celebrities who do not use fictional names (although maybe they should).

The most notable celebrity on Twitter has long been President Trump, but this week his output -- and the outrage it churns up -- is being rivaled by Roseanne Barr (that's her Twitter page in the photo above).

Both of them exhibit signs of what might already be known in some professional circles as Twitter addiction, a compulsion that renders the lives of its sufferers unmanageable and leads to destructive consequences.

Whether Trump's Twitter habit has made his life unmanageable or will eventually be destructive to him remains to be seen. But the consequences for Roseanne are already apparent.

Not only did she lose her show after only one brief season, but she has likely destroyed long-time relationships and friendships with cast members, producers and network executives that might take years to repair (if ever).

She is also likely to take a significant financial hit as well in the wake of her old show being dropped by virtually every channel that currently airs it in rerun syndication. In this respect, she is suffering the same punishment as Bill Cosby, whose old show was dropped everywhere following his conviction on sexual assault charges.

Roseanne can complain all she wants that her “planet of the apes” tweet doesn't rise to the seriousness of Cosby's crimes, but it is also true that she has yet to own up to her own mistakes and take responsibility for them.

Instead, over the last few days, she seems to have become emboldened by tweets she is reading from her supporters, and also what she is picking up from various right-leaning radio and TV talk shows where the talk has been all about accusing ABC of holding Roseanne to a higher, different standard than more-liberal comedians who make outrageous statements and are rarely sanctioned.

Whether that viewpoint is right or wrong, it has nothing to do with the hold that Twitter seems to have over some people who might otherwise be rational or sane, but as soon as they start tweeting, they become their own worst enemies.

One thing that occurs to me in the wake of this whole Roseanne Twitter debacle is the opportunity it presents for the public relations profession.

For years, social media such as Twitter has been positioned in the popular imagination as this place where celebrities, who were previously shielded and governed by network and studio publicity departments, could now talk directly and “unfiltered” to their fanbase (or the world in general) without a p.r. buffer.

Certainly, some celebrity tweets are customarily filtered this way already. And there are also plenty of celebrities who don't go near social media at all.

But for the ones who do, and with Roseanne as an example, p.r. pros should be all over their clients now urging them to embrace the protection of buffers and filters that the p.r. reps can provide. In this era of instantaneous social-media outrage and uproar, this kind of guidance would seem to be imperative.

It is also true that Roseanne Barr -- stubborn, headstrong and at times erratic -- just might be the kind of p.r. client who is impervious to advice and counsel, no matter how much she can benefit from taking it.