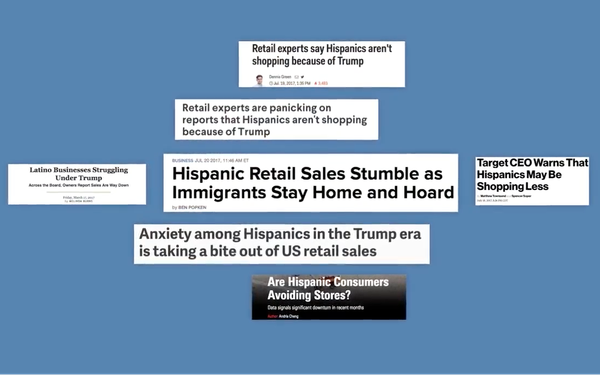 Hispanic consumers are feeling less optimistic as a result of an environment that doesn’t seem as welcoming as it once did.

Hispanics are 50% more likely to have doubts about their place in America versus a year ago, according to Energy BBDO’s  Forging a Bond with Hispanic Consumers: How to Unlock Brand Potential in a Challenging Political Environment, a white paper based on a first-of-its-kind proprietary study detailing U.S. Hispanic consumerism in today’s challenging political environment.

Seventy percent of Hispanics describe an increase in displays of prejudice since the last election and one in four report experiencing race- and ethnicity-driven poor customer service in the past few months.

The study was prompted by a surge in anti-immigration rhetoric and predictions of a Hispanic spending slowdown tied to the new government administration taking office. Before 2016, Hispanic sales were trending above general market. But following the election, Nielsen tracking showed Hispanics trending 1 to 2 points below the general market.

There was speculation that the growing U.S. Hispanic consumer segment was staying home more and shopping less. In July of 2017, Bloomberg and other media outlets reported that one of the top 10 retailers in the U.S. saw a decline in Hispanic shoppers and spending.

In an effort to uncover what was really happening, Energy BBDO partnered with Culturati, a full-service, cross-cultural market research firm with strong U.S. Hispanic expertise, to delve deeper into the issue.

The quantitative and qualitative study incorporated 1,000 online surveys of both documented and undocumented immigrants, as well as non-Hispanics, and in-depth focus groups to provide a broad-based understanding of the tensions among U.S. Hispanic communities.

Shopping preferences have been somewhat impacted. Hispanics are shopping less frequently at mainstream grocery and convenience stores, and they are opting to shop at retailers that offer value and familiarity. Hispanics are making 33% fewer trips to mainstream grocery stores and 40% fewer to convenience stores. Instead, they are making 46% more trips to mass merchandisers, 41% more to dollar stores, and 31% more to discount clubs. Trips to Hispanic grocery stores are also on the rise—up 28% among Hispanics and 40% among undocumented Hispanics.

Based on study findings, Energy BBDO has identified an opportunity for brands to forge a bond with this significant market. U.S. Hispanic spending has continued to rise despite negative political rhetoric.

Hispanics are feeling a clear void and sense of displacement, but brands can help fill that void by showing their support to the community. Brands can take action to play a larger role in consumers’ lives, thereby building trust and long-term loyalty, says Tonise Paul, president and chief executive officer of Energy BBDO.

“There’s no denying the growth potential the Hispanic market represents for our clients’ brands,” Paul said in a release. “In this time of vulnerability for U.S. Hispanics, what we do to address the community, directly or indirectly, is more important than ever before.”