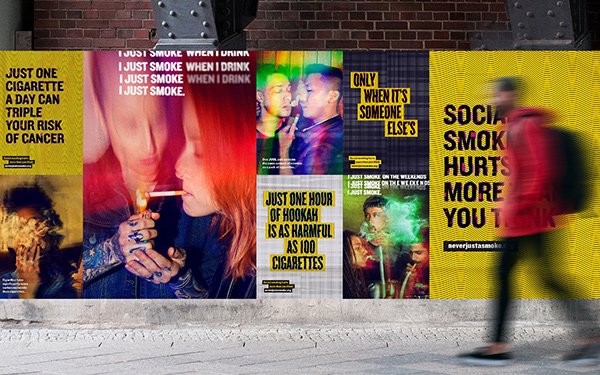 Duncan Channon and the California Department of Public Health’s CA Tobacco Control Program  are out with a new anti-smoking  campaign today based on the alarming insight that many young smokers today don’t consider themselves true smokers because they only light up at parties and other social events.

According to the agency so-called “casual” smoking by young people (between the ages of 21 and 35) is on the rise even as daily smoking is declining.

The new campaign, “Never Just A Smoke,” is designed to belie the perception that “social” smoking is any less harmful than “regular” smoking.

The campaign also raises awareness of the dangers of new forms of tobacco like hookahs and e-cigarettes.

Digital video spots directed by Hoffman/Metoyer create an ‘oh shit’ moment for young people who realize they are smokers only after they struggle to explain away their night-out cigarette to a date or friend. In an arc that begins with each character denying that they smoke, a series of smoke-filled social memories culminates in the realization that they smoke much more than they’ve been willing to admit even to themselves.

OOH executions feature stylized  photography shot by Pari Dukovic that evokes social smokers’ distorted perception of their habit and its harm, along with copy lines that refute some common defenses of social smoking. The imagery is juxtaposed with startling statistics that reveal the true health consequences of occasional smoking and alternate forms of tobacco.

The campaign launches across the state with special focus on reaching LGBTQ, Hispanic, Asian and African-American communities that are at higher risk for social smoking. Digital video will be targeted around key moments and “stressors” that typically drive people to light up, such as graduation and moving.

CTCP has also partnered with Buzzfeed on custom “Regrets You Have After A Night Out” video and quiz content to further engage young social smokers about the health hazards.

The campaign includes online resources atwww.neverjustasmoke.org. It's the second major effort by Duncan Channon for CTCP as part of a five-year new business win that includes a series of public education campaigns funded by CA Proposition 56 to prevent or reduce tobacco use. In April, CTCP and Duncan Channon launched Flavors Hook Kids, aimed at curbing flavored tobacco use among teens.