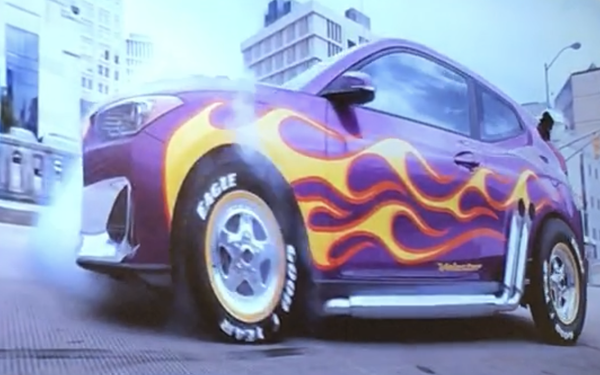 Hyundai Motor America unveiled a TV spot Thursday featuring its partnership with Marvel Comics for the upcoming movie, Ant-Man and the Wasp.

Innocean USA created the 30-second spot, which was originally intended for in-cinema airing but will now get some TV time due in part to how well it has been received, says Brian Smith, Hyundai Motor America chief operations officer.

“Marvel had to sign off on the footage we used from the film,” Smith tells Marketing Day during a Hyundai media event in Detroit on Thursday. “The approval process was more complicated than it usually is.”

The spot shows a Veloster pulling up next to a police car at a stoplight. The police look over at the young male driving the car and become agitated as it appears the Veloster driver is repeatedly revving the engine. But the louder the engine noise gets, the more perplexed he appears to be, shrugging his shoulders and looking around for the source of the noise. Finally, the camera pans down to the ground in between the cars where a miniature Veloster is ready to put pedal to metal, police or not.

The film opens July 6. It will also feature the Santa Fe crossover and the Kona SUV. Hyundai first showed off the Veloster "Ant Car" at the Detroit motor show in January.

Hyundai also presented a five-minute product video that shows off the new 2019 Veloster. That video was published on the automaker’s YouTube page on Wednesday.

“We are really moving the brand into a new place,” he says. The automaker is revealing eight new or updated vehicles in 2018 alone, he notes. Already the new Kona is bringing younger consumers into the fold.

Smith also gave an update on the automaker’s Shopper Assurance program. More than half — about 490 dealers -- have currently signed up for the program, which aims to simplify the car-buying process.

“I expect the vast majority will be by the end of the year,” Smith says, adding that the automaker is helping dealers with the costs of getting set up to offer the program, which aims to ease the shopping process and also give buyers some assurances such as a three-day return policy.

“Some of the dealers that haven’t signed up actually offer even longer return periods,” Smith says.