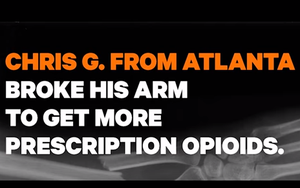 The White House Office of National Drug Control Policy, Truth Initiative and the Ad Council are unveiling a hard-hitting message to raise awareness about preventing and reducing misuse of opioids among America’s youth.

Developed with agency Haymaker, the creative depicts true stories of young adults and how they have attempted to get opioid prescriptions. Amy's story, for instance, shows her driving her car into a cement wall.

Similarly, a man identified only as Chris is shown slamming a door into his hand.

This “Truth About Opioids” campaign represents one of the few times most large-scale media companies — including Facebook, Google and YouTube, Amazon, Vice, Turner, and NBCU — link up to support one campaign message.

Per the Ad Council’s model, the message will appear across digital, social and linear platforms to reach its target of young adults.