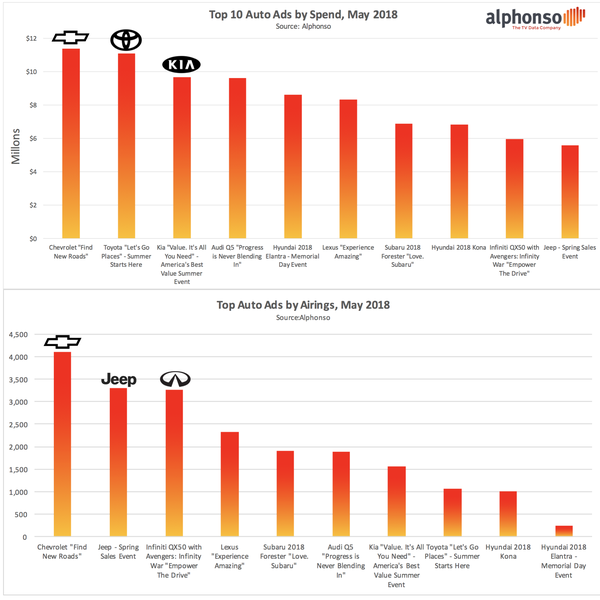 Commercials from Chevrolet, Toyota and Kia were the top three auto brand commercials by ad spend in May, according to research.

Chevrolet’s “Find New Roads” aired 4,094 times at a cost of $11,364,480, according to TV data company Alphonso, which provides brands and agencies with verified TV audience information.

Rounding out the top 10 for ad spending are ads for the Audi Q5, Hyundai Elantra, Lexus, Subaru, Hyundai Kona, Infiniti QX50 and Jeep.

One of the most interesting commercials on the list is a co-op that pairs the Infiniti QX50 with a promotion for the hit film The Avengers: Infinity War, says TS Kelly, Alphonso senior vice president of research.

“This type of advertising marriage between auto brands and entertainment entities is definitely gaining traction,” Kelly says. “In fact, a Nissan Rogue 2018 commercial that featured the new Star Wars film Solo almost broke into the top 10, but missed the cut since creative was divided into two different ads."