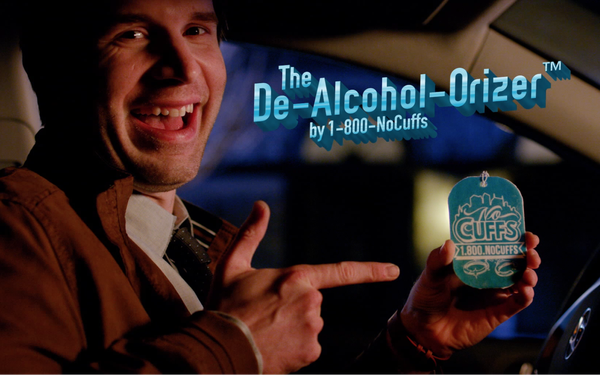 Celebrity criminal defense lawyer Darren Kavinoky is taking a humorous approach to bring attention to a serious issue: Driving under the influence.

Kavinoky, who uses “1-800-No-Cuffs” as his phone contact, is featured at the end of the spot, which starts with a humorous premise.

Bob, who is clearly-inebriated, gets into his car and immediately is confronted by the lights of a police car. While he waits for the officer to approach, he eats the “miracle” product: the De-Alcohol-Orizer. It’s depicted as an air freshener that can neutralize alcohol and other drugs in your system when consumed. It allows him to register a miraculous 0.00 on the baffled policeman’s breathalyzer. A product shot and super offers five De-Alcohol-Orizers for $19.99. “Sound too good to be true?”

Then Kavinoky himself, appears: “Unfortunately, it is. A DUI won’t just go away.” He goes on to discuss his firm and services and ends with his tagline “No one looks good in handcuffs…. unless you’re into that sort of thing.”

The campaign kicked off by marketing the De-Alcohol-Orizer on Instagram, Facebook and Snapchat in the form of animated gifs encouraging people to “undrunk yourself,” all directing to www.de-alcohol-orizer.com where they can learn about the technology behind the product and sign up to be alerted when they go on sale.

And to further cement the legitimacy of the product, Marc Schechter, the influencer behind @pizzaman_420, conducted his own test and review to his followers with the caption, “I ate an air freshener and it made me sober”

The following week, when the TV, radio and second wave of the social launch reveal that the De-Alcohol-Orizer is, in fact, too good to be true, Kavinoky sent all people who signed up on the site a free non-functioning (and inedible), De-Alcohol-Orizer air freshener, in case they need his number in the future. Consumers can continue to order a “De-Alcohol-Orizer” of their very own for free by visiting the website at www.de-alcohol-orizer.com

Kavinoky, the host and co-creator of Investigation Discovery’s Deadly Sins and a frequent guest on The Today Show, Nancy Grace, Dr. Phil, The View, CNN and Entertainment Tonight, is looking to expand 1-800-No-Cuffs nationally through licensing.

“I had long been disappointed with legal advertising in general, and my previous marketing services, while professional, lacked the creative juice,” Kavinoky said in a release. “I became aware of Undnyable and Justin through his amazing and culturally connected work with national brands. We had good chemistry."