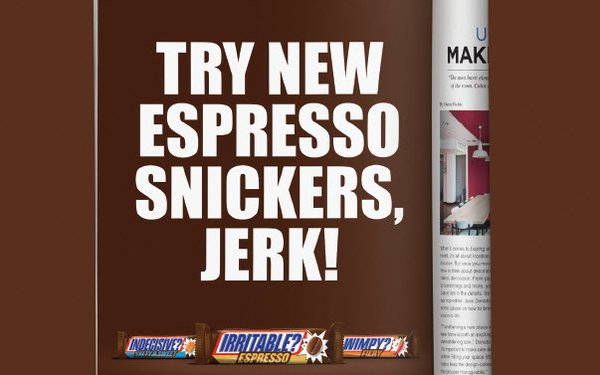 Snickers and BBDO New York are still managing to find new twists on the brand’s seven-year-old “You’re Not You When You’re Hungry” platform.

This time, the new elements include taking an unusual, two-stage messaging approach.

Now, Snickers has launched a 60-second digital/online video (below) in which a brand spokesperson apologizes, saying, “When we ran this print ad to let you know about new Espresso Snickers, admittedly, we were hungry. And it wasn’t until after we tried this new flavor ourselves that we realized just how irritable we were. We’d like to let you know that we’re trying to make amends.”

The video cuts to a bank of customer service reps, with one trying to apologize to a woman outraged that her son’s feelings were hurt by the “jerk” print ad … on his birthday.

The print ad and video include shots of Snickers “hunger bars” —bars bearing words on the packaging that convey various symptoms of hunger. In this case, the messages include “Irritable?” for the espresso flavor; “Indecisive?” for Sweet & Salty; and “Wimpy?” for the Fiery variety.