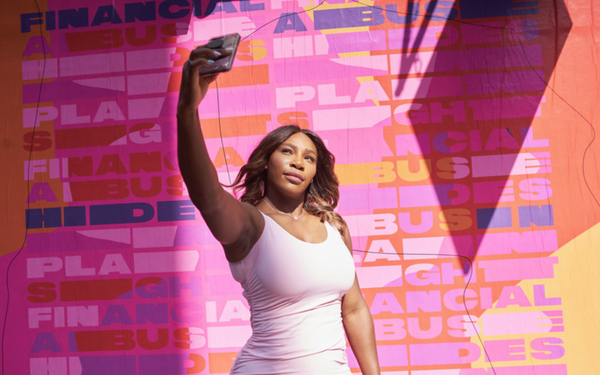 Allstate Foundation Purple Purse is continuing to enlist tennis champion Serena Williams as its program ambassador for a public service campaign focusing on education about domestic violence and financial abuse.

The foundation and Williams announced a national street art campaign for the summer. It includes six photo-worthy and sharable street art murals across the country to spark conversations on social media and drive awareness and education on financial abuse, which occurs in 99% of abusive relationships. The first mural, created by artist Isabel Castillo Guijarro, was recently unveiled by Williams at Tictail Market in New York City.

A hidden message about financial abuse is part of each mural and becomes fully visible when visitors use Instagram's Moon filter. Once the message is revealed, Purple Purse encourages visitors to share their photos on social media using the hashtag #SafeWayOut. In doing so, they will join Purple Purse and Williams in their efforts to help put an end to the domestic violence epidemic, once and for all. Allstate will post about the initiative on Purple Purse’s social media (Facebook, Twitter, Instagram) and Williams will post on her accounts (Facebook, Twitter, Instagram).

Leo Burnett & MSL Chicago created the campaign around the initiative.

Allstate first enlisted Wiliams as a spokesperson a year ago. Williams publicized last year's initiatives — including a short film that provides a look into the life of a domestic violence victim through a purse she has left behind in a Lyft — on her social media accounts.

Domestic violence will affect one in four women in her lifetime, yet even in a time when people seem to openly discuss most aspects of their lives — especially on social media — it's something that remains largely hidden, said Vicky Dinges, Allstate's senior vice president of corporate relations.

"Surprisingly, our research shows the stigma around domestic violence has increased over the past few years,” Dinges says in a release. “By tapping into the growing popularity of free street art and turning it into a vehicle for social good, we hope these murals will bring financial abuse and domestic violence out of the shadows, and inspire a new network of allies for domestic violence survivors.”

The new research, released to coincide with Financial Literacy Month in April, found that one in three Americans thinks domestic violence is a taboo topic, a 10-point increase since 2014. The study also revealed that nearly half of Americans are not familiar with financial abuse as a form of domestic violence, when in fact it's one of the top reasons victims can't "just leave." Financial abuse tactics include preventing victims from working or keeping them from accessing bank accounts, credit cards or cash.

The New York mural will be available for public viewing through the week of July 16. In the weeks ahead, five additional Purple Purse street art murals will be unveiled across the country and will stay up through October, National Domestic Violence Awareness Month, including Houston, New Orleans, Chicago, Seattle and Los Angeles.

The Allstate Foundation is an independent, charitable organization made possible by subsidiaries of The Allstate Corporation.