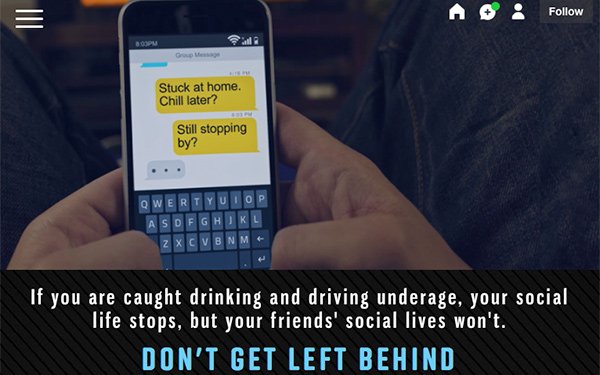 The Ad Council is introducing its first-ever story-driven chat experience on a mobile platform to raise awareness about the consequences of underage  drinking and driving.

The “Ultimate Party Foul” chat story — hosted on Facebook Messenger and supported with donated media from Facebook — invites users to join a group chat with teen characters and actively participate in the story by responding to conversation prompts.

The user gets to know the characters as they plan and attend a party, with one ultimately driving home after drinking. The story concludes the next day, when the rest of the group learns that this character has lost his driving privileges, faces legal fees, and now has to worry about how an arrest record will affect his college applications.

“This immersive experience brings teens into a captivating story where the characters and consequences feel true to life,” says Lisa Sherman, CEO/president, Ad Council. “This is an innovative and powerful extension of our efforts to encourage young people to reconsider getting behind the wheel after drinking.”

This Snaps-designed chat experience is part of the ongoing Underage Drinking and Driving Prevention campaign from the Ad Council, which also includes TV, radio, outdoor, and digital PSAs supported by donated media nationwide.

The campaign directs young people to UltimatePartyFoul.org for more information about how to avoid drinking and driving underage.