Survey: Consumers Not Too Smart About Smart TV 'Spying' 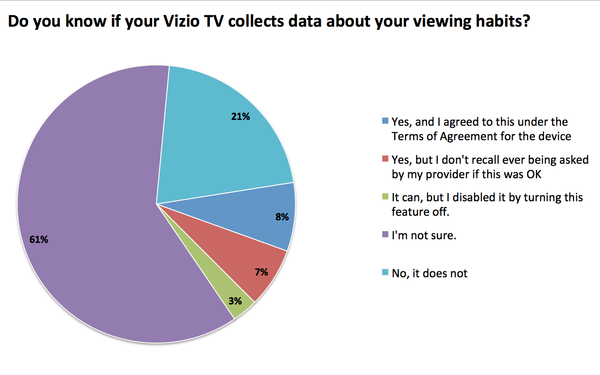 Manufacturers and retailers are pushing smart TVs, but most consumers don’t realize the privacy implications, according to a newly released Ace Metrix survey of 36,000 consumers.

Responses to the survey, which asked consumers specific questions about the consents they’re asked to grant by many smart TV manufacturers, made it clear how little they know about the consents or how their own TVs are monitoring all kinds of behavior, reports Peter Daboll, CEO of Ace Metrix.

Major TV brands are now coming equipped with streaming devices from Amazon, Roku or Google, and the smart TV marketplace is brisk. At the same time, consumer concern over privacy issues is growing. The problem is that the trends have the possibility of colliding with each other, creating a backlash that could harm marketers and erode trust.

“Most people would not assume that the default privacy setting on their new TV would allow almost limitless access to their behavior,” said Daboll. “Users quickly ‘accept’ through a loose ‘consent’ screen while they are desperately trying to get the new TV up and running. Little do they know, that from then on, every action — program, ad, website, stream — is being collected, monitored and shared with other data vendors.

“Even in the wake of some of the most dangerous security breaches in history...most research and data collectors have done little to adjust their business practices to secure consumers’ privacy,’ said Daboll, in a statement. “They need to be leading privacy and consumer consent reform — not following it.” In fact, he asserts, “Research and data vendors are often the worst offenders in violating even basic privacy standards."

Daboll, previously a Yahoo executive and CEO of comScore Media Metrix, uses Vizio as an example of consumers' lack of awareness on the privacy front.

In the Ace Metrix survey, 61% of those with Vizio sets were not sure if their smart TV collected data, and 21% said they were not being monitored. Only 8% knew that they were being monitored and had agreed to the terms, while 7% knew but didn’t remember agreeing. Just 3% knew and actually disabled the mechanism.

When Ace Metrix asked consumers more generally about what kind of data cable/satellite and DVRs collected, consumers were similarly mostly in the dark.

That’s a significant knowledge gap, given the size of the market. NPD estimated that smart TVs will drive nearly half of all connected TV device growth through 2020. Altogether, there will be 260 million connected TV devices by then.

Consumer Reports has been alerting its readers. A story last year said the sets it evaluated did ask for permissions, but it wasn’t easy for consumers to understand what information they were being asked to share. The sites also tend to request “oversharing” to get information about all kinds of things, per the magazine.

"In an industry that depends on consumer information from willing participants, we need to be leaders in protecting these consumers, not the violators," sums up Daboll. "But we’re playing with fire.”