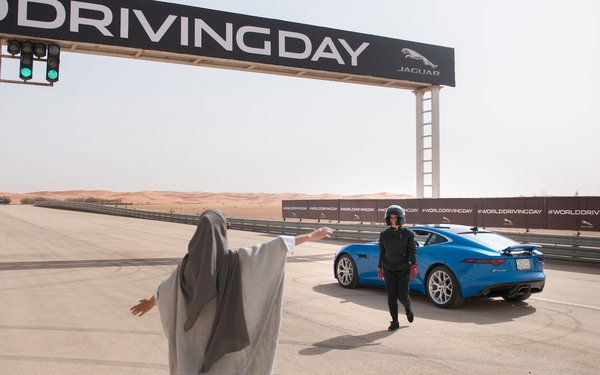 While those n the U.S. “celebrated our freedom” last week with fireworks and gorging on BBQ, women in Saudi Arabia savored a freedom largely taken for granted here: driving.

Aseel Al-Hamad celebrated the end of the ban on women drivers in Saudi Arabia with a lap of honor in a Jaguar F-Type. Al-Hamad, the first female board member of the Saudi Arabian Motor Federation, had never driven on a track in her home country before.

Al-Hamad joined Jaguar in a call for June 24 to be known as World Driving Day — a day when finally, the whole world can enjoy the thrill of getting behind the wheel of a car. On World Driving Day, Jaguar invited people to celebrate the joy of driving and share a memory of their best driving moment (image or anecdote) using the #worlddrivingday.

Jaguar created a video to immortalize the historic drive. In it, Al-Hamad talks about how as a child, she preferred to play with her brothers' toy cars as opposed to the dolls she was given.

“Having loved cars since I was a child, today is highly emotional for me,” Al-Hamad says in a press release. “This is the best driving moment of my life.”

The lifting of the ban was ordered last September by King Salman. It is part of a sweeping reform pushed by his powerful young son, Crown Prince Mohammed bin Salman, in a bid to transform the economy of the world’s top oil exporter and open up its cloistered society, according to Reuters.

Saudia Arabia had the world’s last ban on female drivers, long seen as an emblem of women’s repression in the deeply conservative Muslim kingdom.

In the U.S., women in the early 20th century were not restricted formally, but there was a stigma against women driving. In 1909, to prove a woman’s competence behind the wheel, 22-year-old Alice Ramsey became the first woman to drive across the United States. In 1916, the Girl Scouts initiated an “Automobiling Badge” for girls demonstrating driving skill, auto mechanics and first-aid skills, according to Hagerty insurance, which has a great timeline of the automobile and women.

Who knew that a woman — Mary Anderson — invented the first windshield wiper in 1902?

As of 2012, more women than men have driver's licenses in the U.S., a reversal of a longtime gender gap behind the wheel, according to an Associated Press story, which quotes the University of Michigan's Transportation Research Institute.

"The changing gender demographics will have major implications on the extent and nature of vehicle demand, energy consumption and road safety," Michael Sivak, co-author of the study, tells The Associated Press. Women are more likely than men to purchase smaller, safer and more fuel-efficient cars, to drive less and to have a lower fatality rate per distance driven, he said.

By creating World Driving Day, Jaguar urges people to remember this historic day and what it means to women, to Saudi Arabia and to world progress in general.

“It’s easy to forget and take for granted the enjoyment of driving and just what a privilege it is to get behind the wheel of a car,” stated Fiona Pargeter, Jaguar Land Rover customer experience director. “World Driving Day is a commitment from Jaguar to celebrate this key moment annually for both men and women.”

JLR’s commitment to Saudi Arabia goes beyond this photo opportunity.

As part of its ongoing work with more than 40 universities and academic institutions globally on future mobility solutions, the company will also partner with universities in Saudi Arabia to join this global network. The partnership, to be announced later this year, will be a “unique exchange to tap into the brightest young minds in Saudi Arabia to shape the company’s future innovations as it moves to ACES (an Autonomous, Connected, Electrified and Shared future),” according to the automaker.