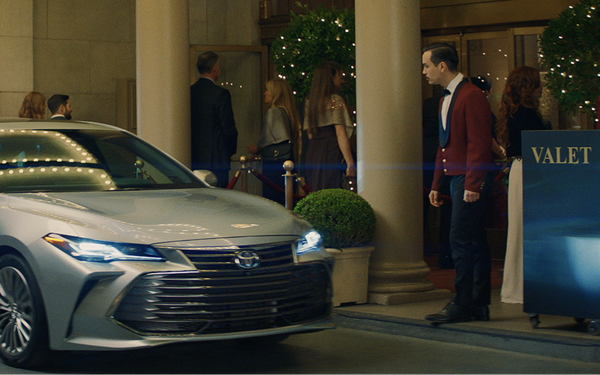 Toyota is launching a campaign for the 2019 Avalon that shows off the sedan’s technologically-savvy attributes that aims to deliver 3.1 billion impressions.

The national effort, "Serious Play," dares drivers to “experience adventure, spontaneity and playfulness, and reminds all that the thrill of driving is the real prize. The campaign drives home the notion that the completely redesigned Avalon has everything drivers need to get more out of life,” according to the automaker.

"The Toyota team has transformed the driving experience for our flagship sedan to set a new standard for the premium segment and satiate drivers' desire for authenticity, spontaneity and exploration," said Ed Laukes, group vice president, marketing, Toyota Motor North America in a release.

The fully-integrated campaign was developed by two of Toyota's agencies of record, Saatchi & Saatchi and Burrell Communications.

Two of the "Serious Play" campaign's national 30-second TV spots, Let's Race and Trojan Horse, were directed by renowned director Craig Gillespie, most recently known for the award-winning film "I, Tonya."  A third 30-second spot, Catch Me If You Can, was directed by Daniel Azancot.

The commercials use multicultural insights aimed at a transcultural audience. The campaign also includes a series of digital videos including “Technology at Play,” “Music at Play” and “Performance at Play” which aim “to tell stories of an impulsive quest for adventure,” according to the automaker.

One feature shown off in the spots is Amazon Alexa connectivity and Toyota Entune 3.0 Remote Connect — an advanced vehicle app that enables you to connect to Toyota  Entune 3.0 technology and manage your Toyota from any distance (as long as both the vehicle and smartphone are able to establish cellular connections).

Additionally, spots will air within select movie titles in theaters nationwide throughout the summer in conjunction with National CineMedia.