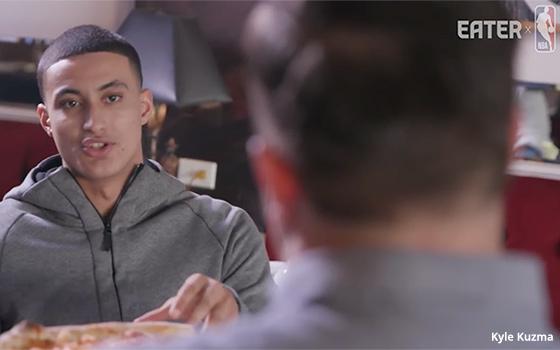 Vox Media’s food brand Eater has partnered with the NBA on a four-part YouTube series called “Home & Away.” Eater had never done sports video content before this partnership.

The NBA wanted to produce content with lifestyle brands that were “a little outside of their normal target audience,” Maureen Giannone Fitzgerald, executive producer at Eater, told Publishers Daily.

While the NBA could have chosen to partner with Vox Media's sports news channel SB Nation, it reached out to Eater to reach a new audience, Fitzgerald said.

Eater is based in 24 cities — and many of them align with NBA markets, she added.

Two of the four episodes each focus on a new NBA player who recently moved to play in a city that is a "huge" market for Eater:  Chicago and Los Angeles.

The most popular “Home & Away” episode on YouTube follows Lakers player Kyle Kuzma, featuring his favorite comfort food: lobster pizza. Another episode focuses on Chicago Bulls player Lauri Markkanen as he digs into food reminiscent of his home in Scandinavia.

The series “hones in on this idea of local ... which resonates so well with us,” Fitzgerald said. Sports and food “go so well together.”

The other two episodes focus more on food itself. One goes deep into the Sacramento Kings’ stadium and “all the work and research they do to make it a food destination” for their league and fans, Fitzgerald said. Another looks at why the NBA is “obsessed with the Cheesecake Factory.”

Fitzgerald started the video department at Eater, which has just under 20 people on the team. “This year has been a lot about new opportunities and how to expand on what we doing in terms of video,” she said.

Fitzgerald said the partnership with the NBA can help bring people to Eater’s YouTube channel, which is shy of 1 million subscribers. “Opportunities like this can expand” the channel.