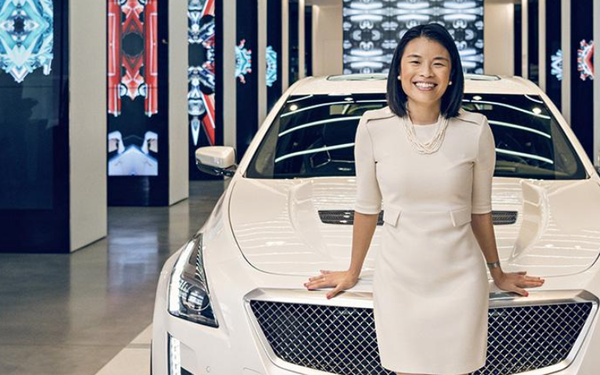 General Motors is losing one of its rising stars in marketing.

Melody Lee, global director of Book by Cadillac, will leave the company Aug. 17 after six years. Lee declined to comment about her pending departure.

She is one of handful of marketing managers to leave or announce plans to leave the division in recent weeks, according to sources.

Change is in the air at the luxury automaker, likely due at least in part to the arrival of new Global CMO Deborah Wahl, who joined the company in late March from McDonald’s, and new President Steve Carlisle, who took over that position in April. Their focus is mostly on improving U.S. sales, according to sources. Wahl defines herself as a “data-driven innovator” on her own LinkedIn page.

Carlisle has been with GM since 1982 and is said to take a traditional view of running the division. Wahl is said to be performance driven, which stands in contrast to her predecessor, Uwe Ellinghaus, who was more of a brand strategist, visionary and storyteller CMO.

In what could be a signal of things to come, the automaker has moved the operations of its 18-month-old Book By Cadillac vehicle subscription service to Detroit from New York, according to sources. Cadillac moved its entire operations to New York three years ago and used it as an opportunity to bring in forward-thinking executives.

The service initially launched in the New York City metro area and was rolled out to Los Angeles, Dallas and, most recently, Munich. It initially was $1,500 a month but subsequently climbed to $1,800. The app-enabled, on-demand service allows Book by Cadillac members to browse a Cadillac portfolio and, based on their needs, exchange a vehicle up to 18 times per year.

Lee joined General Motors as director, brand marketing, Cadillac in 2012. She worked in that position until 2017 when she became global director of Book by Cadillac.

Since joining the automaker, her purview has been to develop Cadillac brand strategy and consistency, to explore and nurture partnerships and experiential marketing, and to head up the global marketing planning team that ensures the Cadillac brand is consistent around the world.

“We used to consider product in one category and communications in another and experience at the dealer level a third bucket — and hoped that the three of them combined to form some sort of brand image for Cadillac,” Lee said in her biography on the GM website. “My job has been to reverse that paradigm, help form a brand image and translate it across all of Cadillac’s touchpoints.”

Lee, 37, was brought to Cadillac as one of General Motors’ youngest-ever executives, tasked with a plan to re-invent the then-110-year-old brand.

She immediately led the complete overhaul of Cadillac’s brand positioning and identity. In the second year, she was part of the decision to move Cadillac from Detroit to New York. In year three, she developed and oversaw the launch of Cadillac’s groundbreaking “Dare Greatly” marketing platform. In year four, she led the strategy, design, construction and curation of Cadillac House, a brand experience center and content generator. In year five, she created and launched Book by Cadillac, the first luxury vehicle subscription service.

During her tenure, which also included the role of deputy CMO and the coordination of a $300+ million marketing budget, 100 global marketing employees and 150+ agency partners, Cadillac global sales grew every year (three of five years with double-digit growth), with 2017 seeing the highest global sales for the brand since 1984.

From 2014 to 2017, Gen X&Y opinion of the brand rose 5%, and Gen X&Y share of attendance at Cadillac events rose to 84% (from 30%). Over five years, lifestyle media impressions tripled, and social media conversation on the brand rose by double digits each year. Book by Cadillac created a category and immediately garnered 8,000 prospects — without a single cent spent on paid media.

After creating the category of luxury vehicle subscription, Lee took over Book as a discrete business unit, with responsibility for Book’s P&L and a dedicated organization, immediately expanding into three additional markets. Book is a proven disruptor, with an average member age of 41 (20+ years younger than the average Cadillac owner) and 85% of nearly 12,000 prospects having never purchased or leased a Cadillac previously.