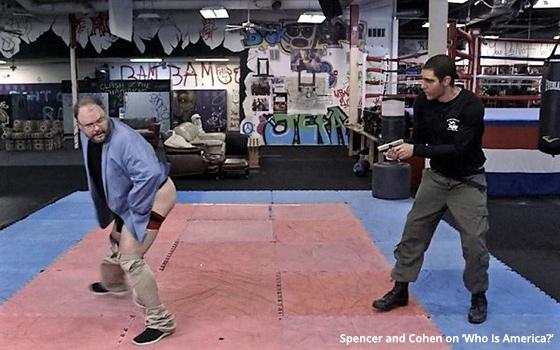 Nobody should be too surprised that Jason Spencer, the Georgia state legislator who really let his pants down this week on Sacha Baron Cohen's new Showtime show “Who Is America?,” resigned days later.

Except for one thing: We live in strange times. Under any number of normal circumstances, this guy's resignation would have been a no-brainer.

Today, however, “normal” circumstances do not necessarily apply. It would have not been entirely unexpected for him to have mounted a spirited defense of his actions and then vow to remain in office until his term was up.

Spencer, who only had a few months left in his term anyway, actually did mount a defiant defense on Monday, the day after the show aired on Sunday evening.

Amid near-unanimous condemnation and calls for his resignation in the Georgia statehouse in Atlanta, he is quoted as first acknowledging that the incident seen on the show was a “ridiculously ugly episode.”

But he then tried to shift the blame to Cohen. “Sacha Baron Cohen and his associates took advantage of my paralyzing fear that my family would be attacked,” he said.

In many ways, either deep down or otherwise, many of us feel a vague unease or even fear of terrorist attacks, particularly those of us who live in large urban centers such as New York City.

Spencer, seen in the photo above doing his utmost to embarrass himself, represents a small portion of Georgia located in the far southeast corner of the state. I could be wrong, but I feel it is doubtful any terrorists are planning an attack there (although one never knows).

His behavior on “Who Is America?” is inexplicable. Who in their right mind would agree to do what he did, while cameras rolled? Perhaps he was told the video crew was there to film footage for some sort of private use, and not a show that would turn up on Showtime.

Whatever their alleged purpose, there is no indication the cameras were hidden. So, in front of them, Spencer did the following: With Cohen playing the role of a former Israeli special ops warrior, he instructed the gullible Spencer to do a racist impersonation of a Chinese tourist, agree that Muslim women in America should be banned from wearing burqas, scream the n-word repeatedly at the top of his lungs and pull down his pants so he could “threaten” a theoretical Muslim attacker with his bare rear end.

Spencer did all of these things without any noticeable hesitation or skepticism. Under the circumstances, his resignation was inevitable.

The Jason Spencer-Sacha Baron Cohen incident was just one of two things going on in the world of TV this week that are making headlines. The other is Roseanne Barr's sudden emergence this week to talk about herself and the loss of her network sitcom.

She has certainly gone through a number of phases since late May when her now-infamous tweet about Valerie Jarrett's ancestry derailed last season's “Roseanne” revival.

At first, Roseanne was tearful and apologetic, and seemed to take at least some responsibility for her actions (while also blaming other factors such as Ambien for her late-night tweeting).

More recently, however, she has become defiant, declaring that it is the “the media's” fault she got fired because, says Roseanne, the media is “biased” against her because of her support of President Trump.

As this week began, Roseanne posted two videos on her personal YouTube channel in which she pursued this line of thinking -- saying, basically, that she was misunderstood and that she is a victim here.

Now it seems that the YouTube statements were just a lead-up to her next act -- a live, one-hour interview with Sean Hannity Thursday night on Fox News Channel (with additional material that will air Friday night on “Hannity” as well, according to reports).

For a TV columnist, these unusual TV-related stories are a godsend -- since this summer has been one of the deadest in recent memory where the introduction of new shows, or TV news of any kind, has been concerned.

So thank you, Roseanne, and thank you, Sacha Baron Cohen, for giving us all something to talk about this week.