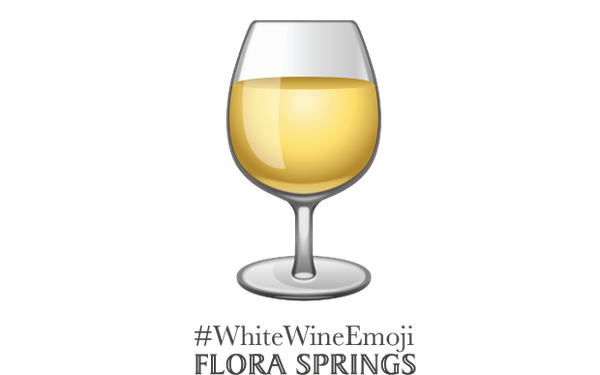 It’s hard to figure out how this omission has lasted so long, but there is a beer mug emoji and one with a whiskey tumbler, a Champagne bottle and a red wine glass.

There is not a white wine glass emoji.

And now, Kendall-Jackson, the well-known winery that produces 1.7 million cases a year, is on it!

In May, it submitted a 15-page proposal for a white wine glass emoji to Unicode, the body that decides on international coding standards. It’s been approved to go to the next round, which is a review by the technical committee.

In the last couple days, this has led to some exciting nationwide press coverage in wine trade journals and major news outlets like Forbes and the “Today” show. By next April, when such things are decided by the Unicode organization, the world might have a white wine emoji.

Actually, though, a much smaller winery would like some credit, too. Flora Springs, which produces just 35,000 cases of wine each year, started a marketing campaign pushing the emoji idea in December.

On Tuesday, it put out a press release in which Nat Komes, the Flora Springs general manager said, “It’s gratifying to see other wine companies follow our example of making wine fun and relevant with their own petitions and campaigns to establish a white wine emoji. The Unicode Emoji Subcommittee encouraged us to work as a global community on the project, and these additional efforts of wine companies and of course white wine lovers around the world will help us reach the goal Flora Springs sought when we started this movement.”

Contacted today by Marketing Daily, Komes added, “I’m happy to say that we appreciate the efforts of Kendall-Jackson to establish a white wine emoji.” But it appears, without Flora Springs quite saying so, that Flora Springs thinks that idea of the “global community” working together didn’t quite take shape the way the winery might have imagined.

Way back in January, Flora Springs began using #WhiteWineEmoji on social media. It started a playful Change.org petition. And in May, it filed its own application with the emoji czars. So did the Fetzer winery.

Craig Cummings, with the emoji subcommittee, wrote in June to inform Flora Springs that Kendall-Jackson also applied and that was the application that would go forward. “Together, I'm hoping you, other wineries, wine associations, and white wine lovers around the world can help compel the subcommittee to encode a white wine emoji sooner rather than later,” Cummings wrote. He added that Kendall-Jackson “graciously offered to coordinate.”

At Kendall-Jackson, Lauren Svoboda, senior brand manager, says Flora Springs might have had the first marketing campaign, but that Kendall-Jackson’s  emoji application was the one the committee chose. Anyway, she says, the white wine glass emoji, if it happens, won’t be branded for any winery, so it’s a happy ending for all of the wineries.

Even Komes says, “We are more optimistic than ever that the white wine emoji will become a reality, and that white wine lovers will finally have more than one digital wine icon on their smartphones.”

Meanwhile, Svoboda and Kendall-Jackson are encouraging white wine drinkers to visit a new whitewineemoji.net website and participate in a mass movement on National White Wine Day (Aug. 4) to show the emoji gods just how strong the market for a white wine glass symbol really is.