'The New York Times' Introduces 'Your Feed' To iOS App 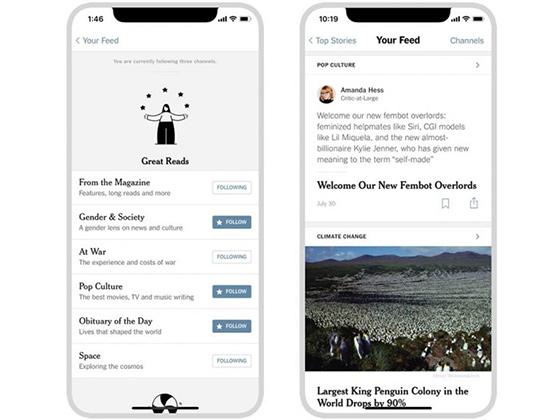 To help its readers keep up with the roughly 160 articles published per day, The New York Times has added a feature to its iOS app called “Your Feed.” The feature allows users to create customizable channels made up of Times’ content.

Rolled out last week and officially announced on Friday, “Your Feed” provides users with 24 different channels to follow, some as specific as collections of columns like "Modern Love" and others as broad as "Gender & Society" and "Climate Change" that pull content from across sections in the newspaper.

In some cases a channel may even feature commentary from reporters and editors or offer reads from outside The Times to offer further context around an issue or topic.

According to a post on Medium published last week by lead product designer Norel Hassan, the new feeds was inspired by the physical experience of reading a newspaper: offer the same experience a reader has when picking up a print edition, jumping from section to section based on interests.

The feed, which took six months to develop, was created to offer readers a carefully curated selection that brings the most relevant pieces to the front.

The developers gathered a test group of readers to help determine how best offer news through the use of four hypothetical customized features: “Archive,” “Follow,” “News you can use” and “Queue.” Researchers discovered users were most interested in following different types of content rather than saving news for later.

The Times also drew from previous product development, including a text message experiment used during the Rio Olympics, which allowed readers to connect directly with sports editor Sam Manchester. The engagement was overwhelming, and the feature has since been improved. The experience was also adapted to the new feed.

To achieve a similar level of connectivity, “Your Feed” will make use of The Times’ Slack channels to create a CMS for the feed. A bot created for the app will guide editors, producers and reporters “through the process of sharing links and publishing commentary” for readers.

Research also showed that readers wanted fewer, but more applicable stories, rather than many stories that made them feel like “they were working through a to-do list.” Developers decided not to use an algorithm that might overwhelm readers. Instead, they created a system that allows editors to choose the stories that appear in each channel.

Hassan writes: “When we were determining what channels would be offered in Your Feed, we knew we had to strike the right balance with channel topics. There had to be enough channels to satisfy a range of interests, but not so many options that we would overwhelm our users. We took the same considerations for the publication cadence within channels.”

The Times will continue to adjust the channels, content and features in “Your Feed” over the coming month.