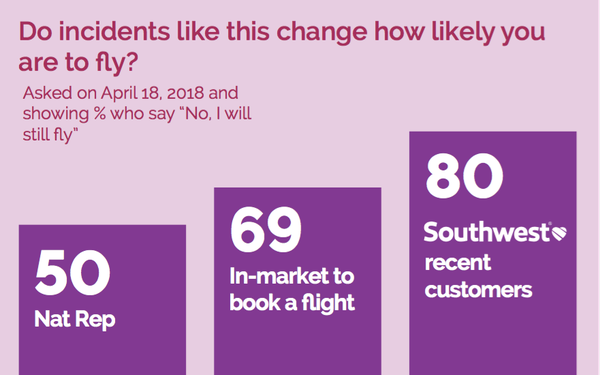 Southwest Airlines continues to recover after a deadly incident earlier this year, according to YouGov.

A Boeing 737 flying out of New York made an emergency landing in Philadelphia in April after its left engine exploded, killing one passenger. The pilot managed to gain control of the situation and land the plane. It was the first time a passenger had died in an accident on a United States airline since 2009, when a commuter plane crashed in New York.

YouGov’s report, “Cabin Check: An Analysis of the Airlines Sector,” provides an in-depth case study of Southwest and shows that after the incident, Southwest’s brand health is recovering.

“The data shows that one in two people says that incidents like Southwest’s engine failure don’t affect how likely they are to fly,” Marzilli tells Marketing Daily. “Additionally, Southwest customers and people who already intend to fly are not affected by it, as regular travelers seem able to distinguish between the general risk of air travel versus an airline-specific event.”

From the day the emergency garnered attention, Southwest’s positive Buzz and Quality fell in three key groups: the general U.S. population, those who are in-market to book a flight, and recent Southwest customers. Southwest’s Purchase Consideration, however, remains relatively stable after the event and especially with the brand’s key stakeholders — its recent customers — Purchase Consideration barely budges.

“There were likely several contributing factors,” Marzilli says. “It could be that consumers didn’t necessarily view the emergency as Southwest’s fault, and consumers likely viewed this as a random event that is likely to be repeated.”

Buzz proved to be the most sensitive metric and briefly took a dip into negative territory amongst the three groups. Just one month after the event, Southwest’s Buzz begins to recover, especially amongst its recent customers, suggesting that strong brand loyalty is at play.

So while Southwest’s Buzz and Quality scores see a marginal decline before eventually rebounding, the brand’s Purchase Consideration stays steady through the same time period. This could be due to positive press around Southwest’s flight crew, which was widely lauded for its post-event heroics, particularly the pilot who successfully landed the plain with just one working engine.

What’s notable is the increasing number of people who say that events like this don’t affect their decision to fly, particularly when recent Southwest customers and those in-market to book a flight are asked. Of those two groups, 80% and 69%, respectively, say that crises like Southwest’s do not dissuade them from flying.

It is likely that the actions of the flight crew, which were praised in the media, created positive press for Southwest in a time of crisis, Marzilli says.

“Positive media attention after the incident helped Southwest control the damage, compared to more negative coverage of other events,” he says.