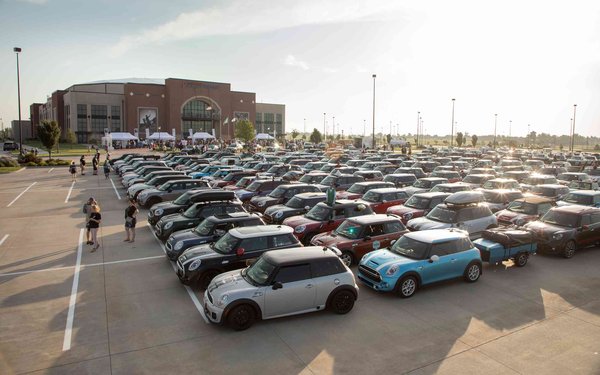 DODGE CITY, Kansas — The sun had only begun to peek over the horizon as a steady stream of Minis made their way into the parking lot of the United Wireless Arena.

You wouldn’t think this small town of 27,340 would have a 5,300-seat arena, but it’s a good thing it does. Without that large parking lot, there wouldn’t have been anywhere for almost 500 compact cars to park.

It’s the beginning of another day for the Mini Takes The States event, which attracts some of the most loyal and impassioned vehicle owners in the world. After all, you have to be pretty enamored with your car to want to spend upwards of 10 days traveling in it.

The event ran from July 14-22, but owners first spent two to four days traveling in their Minis from their hometowns to the first city on the tour: Orlando for the Eastern route and Portland for the Western one. The truly committed had their car shipped across multiple states to the starting line.

Most of the Minis were decorated with aftermarket accessories and other offbeat elements. Beavis and Butt-head protruded from one sunroof. There was a contest each day to select the favorite Mini and the favorite vanity plate. A crowd favorite was “PB4UGO.”

The Eastern and Western routes converged in Keystone, Colorado -- hence the name for this year's event, "Rally to the Rockies" -- for two final days of driving events, an autocross course and lots of social activities.

There were some impressive statistics. The group of loyal Mini owners traveled more than 5,000 miles through 15 cities and 14 states. At times there were more than 1,000 owners and 500 vehicles on each route. Roughly 22 speeding tickets were incurred (Mini owners like to call them “Motoring Awards”).

Kind Bars was one of the major sponsors this year and over the course of the event, a staggering 45,000 bars were consumed.

In Keystone, attendees queued up to talk to a representative from another sponsor -- Pirelli -- and enter a contest for free tires.

Another sponsor, Shell, also prompted a line in Keystone. Mini owners waited patiently to spin a game wheel to see what they would win from the gasoline and service retailer, such as a $10 gift card.

Mini USA, an independent brand of the BMW Group, surprised the loyal community of Mini owners with the debut of the new Mini John Cooper Works International Orange Edition. A small fleet of the boldly colored, limited-production, special-edition vehicles was on display each morning and traveled on both the Eastern and Western route with the owners.

The Mini John Cooper Works International Orange Edition will arrive at dealerships across the U.S. in fall.

The biennial road rally also has a charitable aim, raising money for more than 1 million meals for Feeding America. Mini USA also confirmed that fundraising efforts to support Feeding America will remain open until the end of the year at MiniTakesTheStates.com.

During several of the rallies, representatives from Mini’s manufacturing facility, Plant Oxford located in Cowley, southeast of Oxford, England, auctioned off limited-edition Mini sports shirts to benefit the charity. Several went for upwards of $300 each.

The Mini USA sales organization is represented in the U.S. through a network of 126 Mini dealers in 39 states. Mini USA began selling vehicles in the U.S. in 2002 with the introduction of the Mini Cooper and Mini Cooper S Hardtops. Since then, the Mini brand in the U.S. has grown to encompass a model range of six distinctive vehicles.

Tom Salkowsky, Mini’s vice president of sales, was on hand at many of the rallies on the eastern route to give the owners a pep talk before they hit the road each day.

The auto veteran is no stranger to marketing and customer loyalty. A 21-year employee of the BMW Group, he was previously department head of marketing steering for Mini at BMW Group headquarters in Munich. He also headed Mini’s U.S. marketing from 2010 to 2014.

“The wonderful thing about Mini Takes The States is, it is truly about the community of Mini owners,” Salkowsky tells Drive Time. “We are the stewards of the brand -- and they are the community that builds the brand. We have this mantra, ‘Mini is the only car that comes standard with friends.’ And that is truly on exhibition across America these last 10 days.”

“The part that’s interesting about this route is that it’s east and west, and it’s a shorter period of time, which enables more owners to join in,” he says. Still, many owners came from faraway states to join one of the two routes at their beginning. Both New Englanders and Midwesterners joined the route starting in Orlando.

“It’s this spirit of adventure, it’s the spirit of community, it’s where people from different coasts and different parts of the country who know each other online want to see each other again," adds Salkowsky. "And we facilitate that. It’s an honor, and we’re grateful. It’s our way of saying thank you for building this community.”

Prior to the event, the automaker offered a matchmaker program where participants from each route could be pen pals, share stories from the road and then finally meet up in person in Keystone.

Many participants have had multiple Minis over the years; in many cases, there are multiple Mini owners within the same household. “We have a couple here who have had 10. They met through Mini,” Salkowsky says. “We’ve had marriages that have happened through the Mini community. The stories are boundless here.”