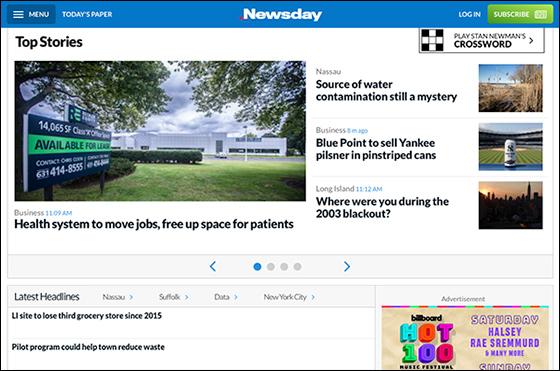 Dolan, the president of News 12 Networks and Newsday Media, bought the majority stake in Newsday in 2016, and Altice kept 25%. Altice has owned Newsday Media since 2008, when it took over Cablevision.

Since then, subscribers to Altice USA’s broadband service, Optimum Online, got free access to Newsday’s website and mobile apps.

Now that Dolan has acquired the remaining shares of Newsday, free digital subscriptions will no longer be included as part of Optimum service, starting Sept. 15. However, Newsday is giving a trial offer to Optimum customers who sign up to get free access until the end of this year.

Newsday is hoping to use this opportunity to sell digital subscriptions next year, according to Long Island Business News.

“Growing subscriptions, both print and digital, remain a high priority for our entire company,” Newsday publisher Debby Krenek told LIBN. Newsday digital subscriptions grew 30% over the past year, she said.

“The Optimum change presents us with a unique opportunity to grow our digital subscriptions, and we have marketing plans in place to enable us to take advantage of this opportunity,” she added.