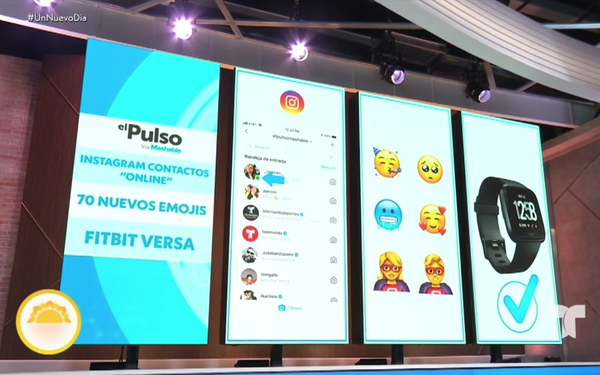 The show, created in 2014 and focused on consumer technology, will air in Spanish every Tuesday on Telemundo’s morning show, “Un Nuevo Día.”

“El Pulso vía Mashable” is Mashable’s first show for TV, “a move to boost its reach among younger Hispanic viewers,” according to Telemundo.

Each segment runs three to five minutes. Shot and produced at the new Telemundo Center facility in Miami, the show is made in collaboration with Mashable editors and hosted by Alix Aspe, Telemundo's bilingual reporter and producer.

One of the first segments features Aspe testing the new Fitbit Versa. A new digital video series coproduced by the two companies called “Power Up” will launch online in English, in addition to Spanish, as part of the partnership.

Peter Blacker, executive vice president of revenue strategy and innovation at NBCUniversal Telemundo Enterprises, told Adweek the company first started working with Mashable because it "received requests from advertisers." There was an "underserved space" in "Hispanic and tech."

Telemundo is working to get sponsors for “El Pulso via Mashable" on TV," according to Variety.

Mashable was acquired by Ziff Davis last December, resulting in staff cuts of up to 30%. The new owners refocused coverage on tech and tech lifestyle content.