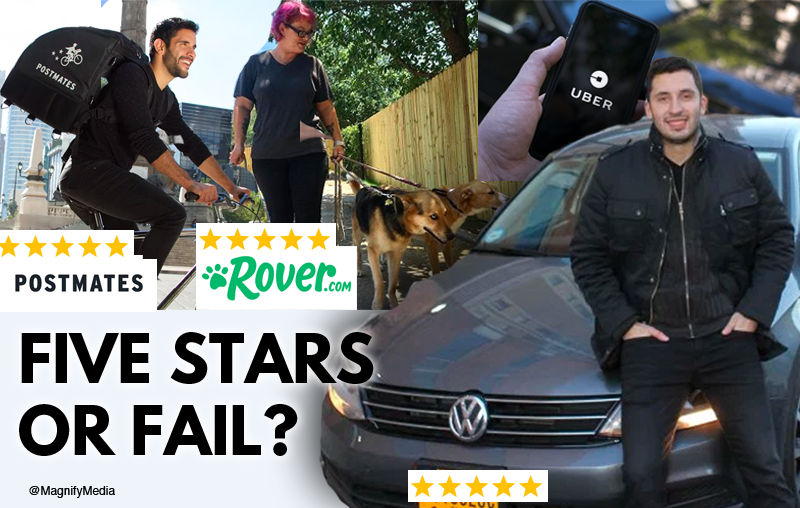 When Dave Eggers' book "The Circle" was published in 2015, it walked a fine line: part dystopian novel about the future, and part a look at the current state of things inside large digital platform companies.

The book is about a young woman named Mae who lands a dream gig at a Google-like company. Her job is in "customer experience," which has her begging customers for a perfect feedback score -- and getting in hot water with her manager when she receives anything less than five stars.

At first the idea of ranking services seemed a bit far-fetched. After all, how could a company even manage all that data?

Then Uber began enforcing its controversial passenger ranking system and making it clear it would remove drivers whose ranking fell below pre-determined limits. That minimum rating requirement varies. In Atlanta, the average driver rating is a 4.8.

But in the past few months, I've noticed more and more companies end customer interactions with "Would you stay on the line and complete a brief survey?"

In my last five calls to customer support -- to a telco, a health care provider, and a web hosting company -- I've been asked to rank the quality of support.

There are a few problems with this practice. First, while the surveys are said to "last less than two minutes,"  those minutes add up. More seriously, when I'm left unhappy, more often than not it's with the company's policies -- not an individual service provider.

Uber figured this out, so when a rider gives anything fewer than five stars, Uber prompts the rider with the question “what could be improved?”  and a drop-down of options including “too many pickups,”  bad “route by Uber,” and “co-rider.”

An issue with "driving" is an option, but it's the last one on the list, and only that reason makes the negative vote impact the driver's star rating.

The question is, does this automated system of review and punishment actually improve the quality of the service that we're receiving?

The on-demand economy is driving a growing workforce of employees who are contracted and terminated at will, often based on little more than user ratings: dog-walking services like Rover and Wag, house-cleaning services like Handy and on-demand technical resources like Upwork.

Ratings help on0demand companies manage scale without having to employ supervisors for a growing remote workforce.

Rating systems have typically been described as a way of establishing trust between strangers. Now trust goes both ways.  In Uber’s system, drivers can also rate customers.  So if you don't tip, or you're rude or leave the car with trash in the back seat, next time you may find you're not getting picked up by drivers on a busy night.  Transparency works both ways.

Harvard Law professor Benjamin Sachs told The Verge: "Customers have always had power, there’s always been feedback, and workers could always be disciplined because a customer complained about you. What’s new is the ease with which customers can give reviews and the almost complete substitution of customer reviews for management."

But in the near term,  the gig economy is replacing managers with robots. Algorithms can fire at will, putting workers in a position of being at risk of termination for often capricious reasons. Does giving a worker a positive rating allow them to earn any rewards or positive feedback? Nope. The only thing that these ratings do is automate punishment and dismissal.