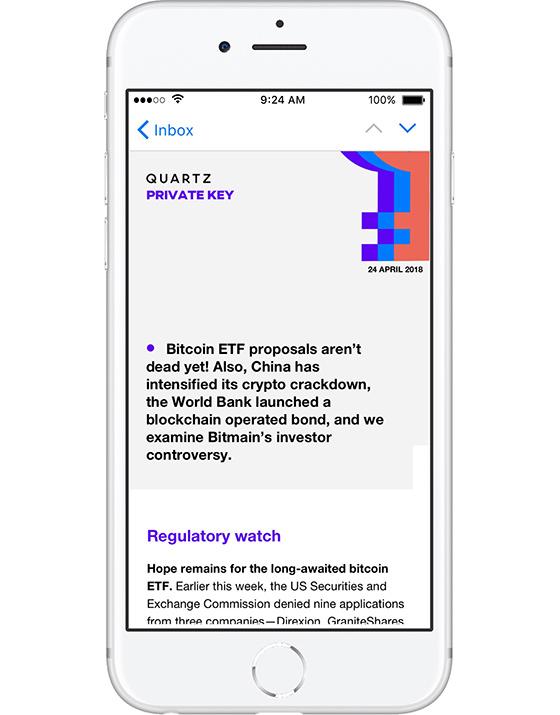 After officially falling under the ownership of Japansese-run Uzabase earlier this month, Quartz has introduced its first paid subscription product, a newsletter called “Quartz Private Key” earlier this week.

Quartz Private Key — which aims to deliver clear, digestible information about cryptocurrency and blockchain intelligence to readers — costs $15 a month and will land in subscribers' inboxes twice a week.

The first edition will mail on September 5.

Quartz reports a strong initial response with hundreds of early subscribers signed on.

Since launching in 2012, Quartz and its team of reporters has followed the evolution of cryptocurrency, regularly reporting on bitcoin and other facets of the industry with stories like “A Guide to Paying Taxes on Bitcoin Investments” and deep dives into some of the most protected crypto mines in the world.

Quartz identifies the newsletter’s intention as being “clear enough for beginners, with the depth to satisfy experts” on its website.

The outlet pledges to bring the same level of expertise to its newsletter.

Staffed by Quartz editorial, the newsletter will include stories and analysis from international contributors including Jason Karaian, Quartz’s global finance and economic editor based in London, Mumbai-based finance reporter Nupur Anand and Helen Edwards, coeditor of Quartz AI based in San Francisco.

The launch of Quartz Private Key follows a summer of growth for the outlet. Previously owned by Atlantic Media, Quartz announced its acquisition by Uzabase in July.

The deal closed in August, as the outlet simultaneously introduced a redesigned website that unified all its editions — Quartz, Quartz India, Quartz Africa, Quartz at Work, and Quartzy — under one bolder and faster format.

Prior to this, Quartz launched a weekly news show "Quartz News" on Facebook Watch that focused on the global economy and includes an interactive bot element. Episodes air every Thursday.