For Most Americans, Personal Data Privacy Now Rivals The Bill Of Rights 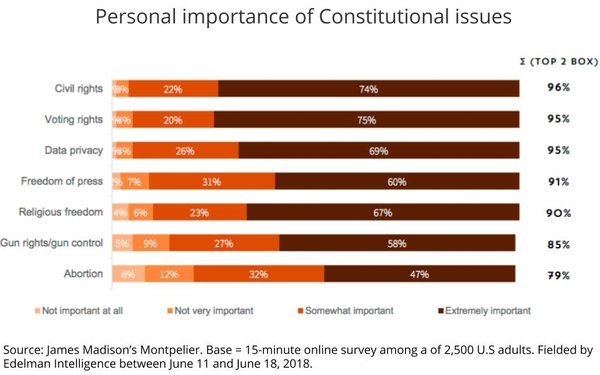 For most Americans, their personal data privacy now rivals our Constitution's most basic rights, according to results of a recent survey conducted by James Madison's Montpelier. The study, which was fielded by Edelman Intelligence, was designed to understand how important and secure Americans believe their Constitutional Rights are, and whether and how they should be amended.

Ninety-five percent of Americans said their data privacy is somewhat or extremely important to them, about the same percentage that cited their civil rights (96%) and their voting rights (95%) and more than the percentage citing freedom of the press (91%), freedom of religion (90%) and the right to bear arms (85%).

Interestingly, 41% of the respondents believe the Constitution needs to be amended, while only 33% said it does not (27% said they weren’t sure).

Asked how it should be amended, the top self-reported response (61%) was to restrict gun ownership, followed by clarifying civil rights (50%) and gender equality (45%), but the next two highest responses reinforce modern era concerns about data and personal privacy.

The next greatest response (34%) was actually for greater press protections, including "accurate/unbiased information from the government."

Asked in a stand-alone question, the vast majority of respondents disagreed that the government (81%) and/or the President (80%) had the right to "knowingly provide false information to journalists." 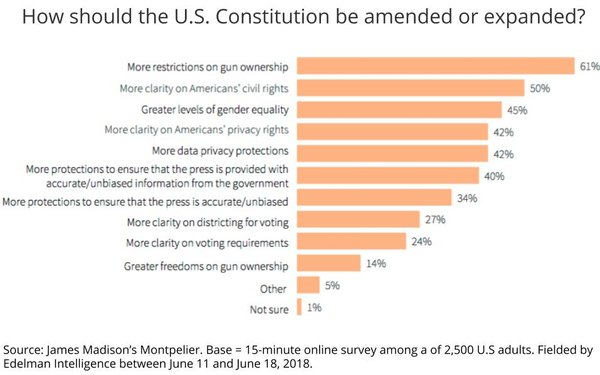