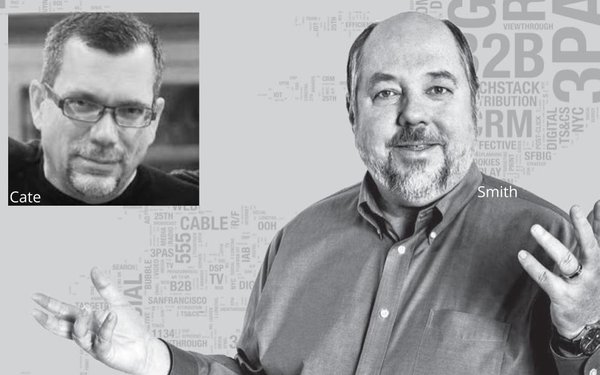 Thirty years after founding fiercely independent San Francisco media agency Mediasmith, founders David Smith and Karen McFee have sold it -- not to a big agency holding company, management consultant or digital platform or technology firm -- but to its own management team.

The move, unusual by Madison Avenue standards, was done mainly to preserve the independence of the agency and its focus on client service, says Smith, who will retain a minority stake and title of chairman, but is otherwise turning his baby over to John Cate, who led the management buyout and will be Mediasmith’s new CEO.

Smith says he will remain active with the agency, but is relinquishing his office at Mediasmith HQ and will also be nurturing unrelated businesses -- including several ventures that he is on the board of, as well as a new, undisclosed, not-for-profit related to the advertising industry.

“This is the right time to do this,” Smith says, noting that Cate and the rest of Mediasmith’s senior management team already had assumed most of the agency’s responsibilities, and “I’ve just been providing air cover for them.”

McFee will retain the title of board secretary, but otherwise retains no interest in Mediasmith.

They declined to disclose the terms of the buyout, including its valuation, but said the Mediasmith management team did not have to raise capital or debt to do it and that it would be funded out of future profits.

Mediasmith currently claims annualized billings of “$60 million to $70 million” and has a staff of 50 people.

“Our EBITDA generally beats the public companies,” he asserts, adding that a number of organizations have “sniffed around” acquiring Mediasmith in recent years, including the aforementioned type, as well as consultants and technology companies, but in the end he said the decision was not about cashing out so much as transitioning over to the next generation.