New For Fall: On CBS, God Seeks Friends On Facebook 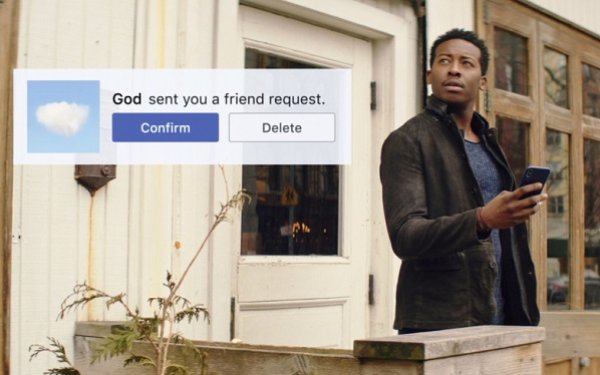 Many might consider social media to be a decidedly godless realm, but a new drama series on CBS posits that it is anything but.

In this show titled “God Friended Me” (premiering Sunday night on CBS), the Lord appears to have adopted Facebook as a platform for promoting his good works.

In a modern-day twist on the ’70s movie “Oh, God!,” the Almighty's appointed messenger in this show is a young man living in New York City who assumes the role played by John Denver in the old movie.

Like the Denver character, this young man -- played by Brandon Micheal Hall (seen in the photo above receiving a Facebook friend request from God) -- is a skeptic who cannot understand why God has chosen him as his earthly emissary. Nor can he accept it, at least not at first.

The young man, Miles, even has a podcast called “The Millennial Prophet” where he preaches the gospel of atheism. This point of view puts Miles at odds with his father, who happens to be a minister (he is played by Joe Morton).

In His friend requests, the God in “God Friended Me” is nothing if not persistent. The requests come so frequently that Miles eventually accepts one of them. After that, “God” recommends that Miles friend a couple of other people.

As it turns out, these people have various troubles for which Miles might provide timely intervention.

And that’s the show. Certainly, these friend requests from someone or something claiming to be God do not immediately cause Miles to convert from his atheism. Part of the show’s storyline is his ongoing skepticism.

Despite the incredible coincidences he begins to experience in his life in the series premiere, he continues to believe that someone is pranking him.

“God Friended Me” is a feelgood show with a foundation built on social media. As such, it seems designed chiefly to appeal to those who use social media the most.

In a world where many might perceive social media as hardly a force for good in the world, especially these days, this show offers a scenario in which social media possesses an untapped potential for making the world a better place.

The challenge for this show will be to try and make believers out of social media skeptics.

“God Friended Me” premieres Sunday night (September 30) at 8 Eastern (depending on NFL football overrun) on CBS.