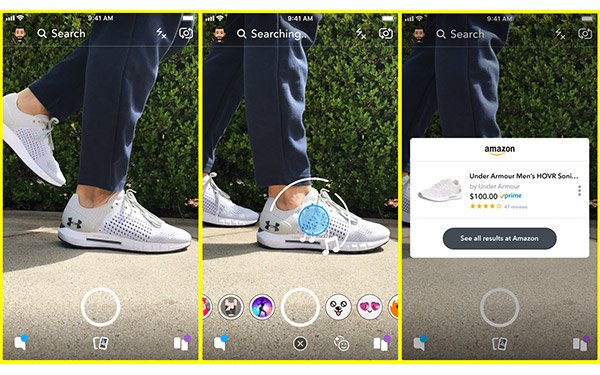 In an effort to boost its commerce strategy, Snapchat has started testing a visual product search feature.

Powered by Amazon, the new feature lets users search for various products simply by snapping their photo -- or their barcode -- with a smartphone. For example, a user might shop for a particular dish soap just by capturing an image of an empty bottle.

When the item or barcode is recognized, an Amazon card will appear on a user’s screen, which will surface a link for that or similar products offered by the ecommerce giant.

If users are satisfied with their search results, they can then tap them to visit Amazon’s app or Amazon.com, where they can complete their purchase.

“We’re testing a new way to search for products on Amazon right from the Snapchat camera,” Snap stated. “We’ll be rolling it out slowly, but we wanted to announce it to everyone at the same time.”

While Snap is positioning the feature as sexy and new, visual product search has been around for some time.

Google has offered similar features for years, while Amazon has been playing in the space for nearly a decade. But interest in visual search remains.

“Visual search is one of the most important developments for retailers since the emergence of product listing ads,” said Holland Dauterive, director of professional services at conductor.

“While consumers have gotten very good at using traditional search to find what they’re looking for, visual search is the next best thing to the traditional in-store browsing experience,” Dauterive added.

Yet, the company said that daily active users actually declined during the second quarter. From the first quarter of the year to the second, the company’s DAUs slipped by about 2% — from 191 million to 188 million.

Snap has also recently experienced a number of high-level departures. Most recently, it's losing Imran Khan, its Chief Strategy Officer since 2014.

Drew Vollero also stepped down as Snap’s CFO earlier this year, along with its vice president, product, Tom Conrad, the head of its Spectacles division, Mark Randall, and its global head of sales, Jeff Lucas.