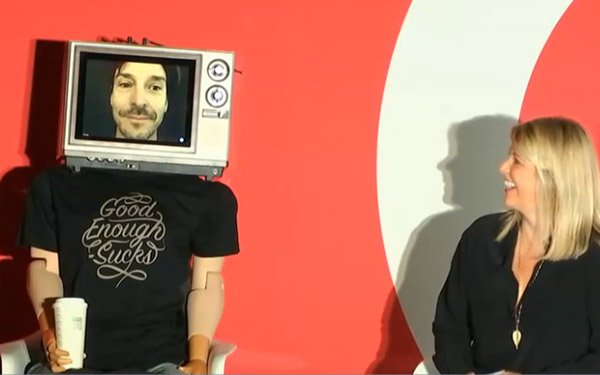 He’s no dummy, but Alex Bogusky played one (of sorts) during an Advertising Week session Wednesday that was largely about how Crispin Porter + Bogusky plans to get its groove back years after it was considered one of the hottest shops in advertising.

Step one, of course, was hiring Bogusky back to the agency. He was gone for about eight years writing books, among other pursuits. After numerous conversations with agency chairman Chuck Porter, he rejoined about six months ago to see if he could help rekindle some of the agency’s old magic.

The Advertising Week session — titled A Man, A Woman And A Bionic Mannequin Walk Into A Seminar — featured Porter, agency president Danielle Aldrich, and Bogusky who (you guessed it) played the part of the bionic mannequin.

He was participating remotely, but a live image of his talking head could be seen in a TV monitor (complete with old-fashioned rabbit ears) that sat atop the aforementioned mannequin on the New York Advertising Week stage. The mannequin was dressed in signature Bogusky attire, including casual pants and a t-shirt which was labeled “Good Enough Sucks.”

The technology was not perfect, as the audio kept fading in an out on Bogusky’s end. At points, people were texting him so he could respond to questions.

Bogusky described his Ad Land reentry as “like a coma and waking up eight years later. I walked out then back in and it was a completely different place.”

The three executives agreed that the agency in the interim had lost some of its uniqueness. But as Bogusky put, it the shop is “not on a mission to recreate the past other than what worked.”

Clients, he added, “don’t want agencies to be all the same. There’s been a major homogenization,” culturally speaking, within the agency world. “Culture is the most important thing to becoming unique.”

As anyone in the business knows, agency life is a tough environment, and has a reputation for grinding people down. “A great day in advertising includes three swift kicks to the groin,” quipped Bogusky. He’s tried to instill a sense of what he calls “delusional positivity” at the agency because staying positive is critical to success.

“We had a strong maker” mentality at the agency, said Bogusky, where very little work was outsourced. Employees learn more when they’re making assets, he said. “Anything that doesn’t get made and out there has zero value. . .if you can imagine it you can create it.”

A pet peeve, he says, is employees who complain that they don’t have enough money to accomplish a piece of work. He notes that for $150,000 “you can build a house,” a least in some parts of the country. “You can certainly build an ad asset.”

The agency is trying to bring more data to the creative process, Bogusky said, but he cautioned against “bad data” like focus groups. He likens data and creative to the game of chess. “An iPhone can beat a Grand Master at Chess,” he said. But a Grand Master and a computer will always beat [another] computer.”

Asked how he defines an insight, he said he looks for “cultural tension.” The creative work is designed to release that tension “and ride the energy.”

And above all else, advertising is fun, he said. Which is why he doesn’t allow ping-pong tables in the office environment. Creatives ought to be having more fun making ads.