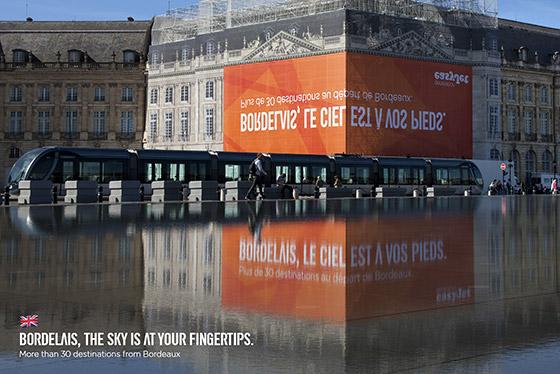 You need a really calm body of water to pull off a stunt like this, but Paris-based Buzzman found one for an outdoor ad for client EasyJet.

The agency created a large banner—the message is written backward—which it hung on a building on Bordeaux’s iconic square, the Place de La Bourse, built during the reign of Louis the XV in the 18th century.

The square has a really large reflecting pool and when you gaze down at the pool the message on the billboard makes a little more sense: “Bordelais, Le Ciel Est A Vos Pied.”

The Google translation is “Bordeaux has the sky is your foot.”  A looser but more meaningful translation of the message (to Americans anyway) is more like, “Bordeaux will rock your world and turn it upside down even, so come visit it, or any of the multiple other locations that EasyJet flies to.”

An erudite colleague of mine points out that the literal translation of the message (as opposed to the word-for-word English translation that Google provides) is "The Sky is at your feet," which makes more sense with the billboard’s execution.

Still, I don’t think this would work on buildings overlooking the Hudson River. Current is way too strong.

Maybe the reflecting pool on the Washington Mall, if any of the buildings surrounding it are close enough. Or better yet St. Mark’s Square in Venice. That would be a seasonal opportunity I think. It usually floods during the rainy season.