Barbie, Dove Get Ready For The Day Of The Girl 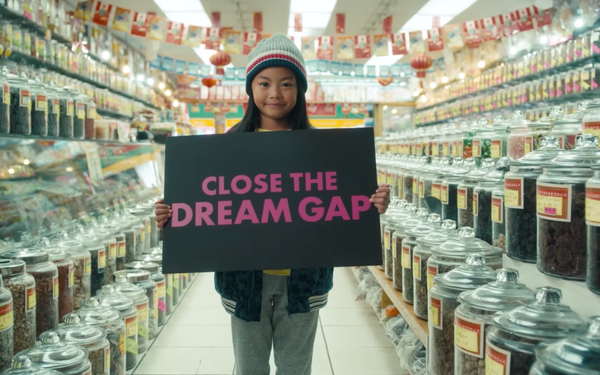 Despite the iratedepressedexhausted somber mood of women’s advocates lately, U.S. brands like Mattel and Dove are gearing up to celebrate the International Day of the Girl, Oct. 11. With ads and content aimed at encouraging education, career-role models and mentoring, they hope to bring awareness to the many ways the world discourages its young females.

Mattel’s Barbie is introducing the Dream Gap Project, an initiative it hopes will raise awareness of ways girls are blocked from reaching their potential. The company cites research showing that by age 5, girls are less likely to view themselves and other girls as either smart or competent.

A launch video stars a handful of adorable kids reading parents the riot act about the many ways they inadvertently undermine daughters: They are twice as likely to Google “Is my son gifted?” than they are “Is my daughter gifted?” for example, and far less likely to give girls science-related toys. BBDO San Francisco is the agency, and a Mattel spokesperson tells Marketing Daily the video is running on YouTube and other digital and social platforms.

The effort also includes a collaboration with New York University associate professor Andrei Cimpian for a two-year post-doctoral fellowship, focusing on the Dream Gap in girls between the ages of 5 and 7. (Does tapping a male researcher to run a project designed to uncover why girls can’t be researchers seem ironic? The Mattel spokesperson says it’s because his work so far “is the most comprehensive research on the topic,” and that Mattel is looking for research partners around the world.)

And the brand, which generated plenty of buzz with the launch of its “Inspirational Women” collection earlier this year, including fencers, boxers, snowboarders and artists, says it plans to highlight at least 10 “empowering female” role models around the world each year.

"The goal of The Dream Gap Project is to leverage Barbie's global platforms to educate society on gender biases and inspire any supporter of girls to join us, as we can't do this alone,” says Lisa McKnight, general manager and senior vice president of the Barbie brand, in a statement.

Unilever’s Dove is debuting The Girl Collective, “a sisterhood on a mission to raise the self-esteem of girls everywhere,” with a vow to reach an additional 20 million girls with messages “that can protect them from the outside voices that influence how they feel about their appearance.” Shonda Rhimes, the filmmaker who has been partnering with the brand on Real Beauty Production videos, hosted the kickoff event on Facebook Live.

Nonprofits are talking about Day of the Girl, too. Girls Inc., citing research that a third of girls between 7 and 10 say their appearance is the most important thing about them, is celebrating the day with the launch of “Pretty,” a book that urges girls to be pretty brave, pretty confident and pretty strong. (It’s written by Dani Coplen, an advertising creative.)

It’s also got a social component, using #theprettyconversation and #selfworthies, pointing out that 35% of girls worry about being tagged in photos that make them seem unattractive, and 65% agree that ads and media set unrealistic standards.

And Plan International is sponsoring girls’ takeovers around the world, including a #DayOfTheGirl emoji for Twitter. Its U.K. division is using the occasion to launch a new video campaign aimed at preventing street harassment.