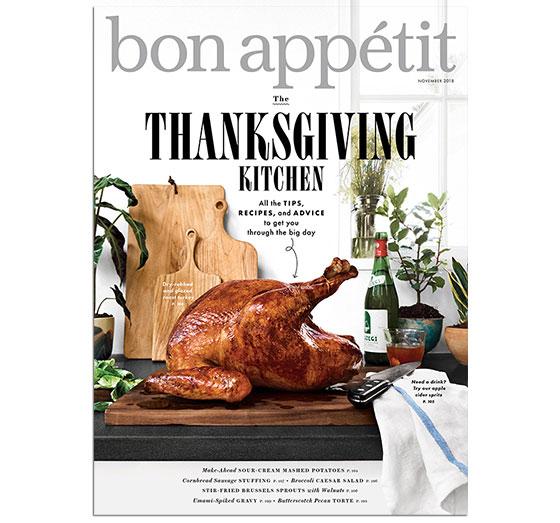 is redesigning its print magazine to “refresh” the book and add elements from the Condé Nast brand’s digital platforms that have resonated with its audiences.

For example, the magazine will feature more personalities from its popular YouTube channel, as well as columnists with large online followings. 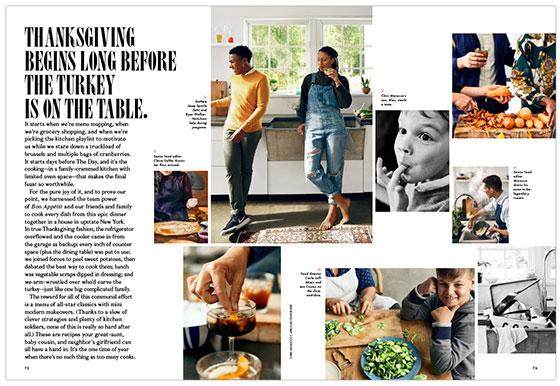 Led by Bon Appétit editor-in-chief Adam Rapoport and creative director Michele Outland, who joined the team in January, the redesign applies the brand's successes in video and other digital platforms to drive print strategy.

The goal was to “start unifying [the look] across platforms,” Outland told Publishers Daily. Rapoport referred to the changes as a “cross-pollination” of Bon Appétit’s other verticals and brands.

Viewers enjoy the personalities featured in the videos, so Bon Appétitis highlighting familiar faces in the magazine with literal illustrations of their faces beside recipes and columns, as well as more in-book commentary from the Test Kitchen staff.

Every month, Bon Appétit chooses an editor to select a few favorite things for the issue, ranging from kitchen ingredients to clogs. “Food is about life, not just recipes,” Rapoport said. These “subtle tweaks” help readers recognize individuals from the Bon Appétit team.

The magazine will also contain regular appearances from new featured columnists who are popular online, such as Alison Roman, author of the “Dining In” cookbook, and Deb Perelman, founder of food blog “Smitten Kitchen.”

Rapoport and Outland streamlined the magazine, cutting back its sections from four to three.

“Home” focuses on lifestyle-focused editorial and home dining, while “Away” is more for restaurants and travel.

Bon Appétit is also adapting its digital brand Basically for its print magazine, as the third section. The brand launched about a year ago, aimed at millennials that want to learn how to cook.

Each issue features one ingredient and everything you need to know about it. The November issue focuses on butter. The magazine's  “Prep School” section, with its techniques and tips from the Test Kitchen, is getting folded into the “Basically” section.

Loyal readers will notice the Bon Appétit logo has been redrawn with “nips and tucks,” Rapoport said, to make it more “refined," Outland added.

The print magazine looks and feels cleaner and more authentic. There isn’t a stock photo in sight. For the Thanksgiving feature story, Bon Appétit staff rented a house upstate to cook the festive meal. The photos in the feature well include their own kids stirring up batter, their faces hovering over the stove.

The cover was shot on a Google Pixel 3 phone, part of a branded-content partnership across seven Condé Nast magazine covers this November.

To keep in line with Bon Appétit's "cool" tone of voice, it was important not to overly stylize the magazine, Outland said.