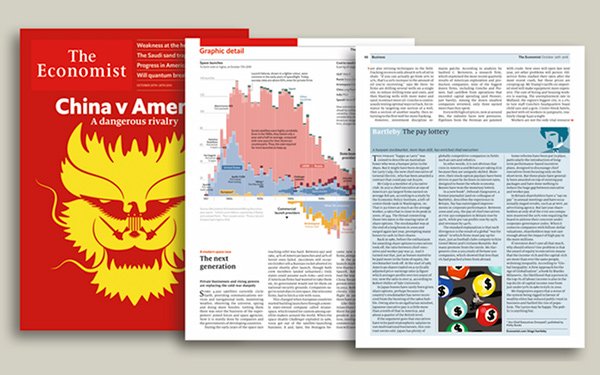 The Economist has redesigned its magazine-format newspaper, the first major changes to its publication since 2001.

The new look — led by The Economist’s art director Stephen Petch and the in-house graphics team — was created “to align the flagship print edition’s look and feel with the rest of The Economist’s product line,” including its website, apps and 1843 magazine.

“With these design changes and new additions, our print edition now matches the broader Economist product family — one uniform, clean and modern design, setting up The Economist for the 2020s and beyond,” stated Phil Kenny, the publication's head of graphics.

The print issue is also getting a new, one-page section, called “Graphic Detail,” which replaces one of the two pages dedicated to the “Economic and Financial Indicators” section.

The “Graphic Detail” section brings The Economist's data journalism team's visual storytelling - a popular format for its online audiences, according to the company - to the print edition.

The inaugural “Graphic Detail” section “showcases how private businesses and rising powers are replacing the cold-war duopoly in today's space race through a detailed visualization of every launch from Sputnik to SpaceX."

The Economist’s print issues are cleaner and easier to navigate, with new typefaces optimized for both print and digital platforms, a larger cover masthead, and bolder imagery and illustrations “suitable for both the newsstand and mobile screen.”

The print issues also feature revised infographics and cartographic styles to provide information in a clearer and more visual way.

The changes will debut in the issue on newsstands October 20, 2018.