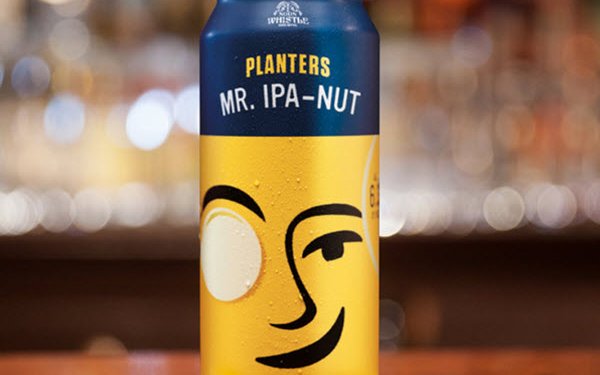 In Kraft-Heinz’s latest promotion designed to keep its brands’ names in the public eye and their fans engaged, Planters has teamed with a craft brewer to release a limited-quantity India Pale Ale (IPA).

Dubbed Mr. IPA-Nut, the ale — the first beer associated with the nut brand — was produced by Lombard, Ill.-based Noon Whistle Brewing, and is the basis for a social crowdsourcing campaign.

Described as having a “citrus aroma with a hint of honey-roasted peanuts, followed by a slightly salty finish,” the IPA will be available, while supplies last, at some 45 liquor and food stores in the Chicagoland area starting on National American Beer Day (Oct. 27).

The hook: 64% of men agree that nuts are the best salty snack to pair with their beer, according to a survey conducted with 1Q in July.

The retailers carrying the ale are listed on a dedicated page on Noon Whistle’s site. A four-pack of 16-ounce cans goes for $9.99.

Fans are being asked to join Planters on Twitter (@MrPeanut) with the #BeerGoesNuts hashtag, to help the brand make “the nuttiest beer ad of all time” to launch “a beer that’s nuts.”

The crowdsourcing campaign is being touted with a video (below) in which Mr. Peanut takes a good-natured jab at the “ice-cold mountains and scalding-hot beaches” de rigueur in other beer brands’ commercials.

“Your WingNut has always had your back, and now he needs you,” declares the voiceover.