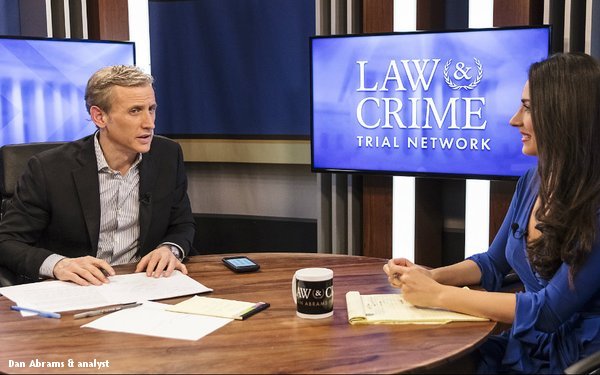 Nearly 30 years ago, the concept of a channel focusing on live trials was so compelling that two different services competed for attention at the 1990 convention of what was then the National Cable Television Association. The two channels soon merged into Court TV, which launched a year later.

Some 10 years ago, the final remnants of Court TV, already rebranded as TruTV, were killed by TimeWarner, now WarnerMedia.

I had Law & Crime on in the background while working this week and can report that the concept of a live video trial service is still compelling.

The heart of Law & Crime is a 24/7 linear channel featuring live coverage of trials on weekdays from 9 a.m. to 5 p.m. You can find it on lawandcrime.com, on Law and Crime’s YouTube page, and on Pluto TV, channel 640.

Law & Crime does cut into its coverage often for commercials, promos and most often, for analysis. “You do not want to miss any of this!” an anchor declared at one point -- ironically, right after the network had cut away from testimony to go to the commercial.

Also, don’t worry if Law & Crime covers more than one trial at a time. Each live trial has a separate dedicated feed at lawandcrime.com, where you presumably won’t miss a thing.

So what kinds of trials does Law & Crime cover?

Well, the week started with an anchor stating, “If it’s Monday, you know it’s murder and mayhem at the Law & Crime Network. That’s what we do.”

But not just on Mondays. While the week began with two live murder trials, by Tuesday Law & Crime was touting coverage of four simultaneous murder trials.

Amidst all this mayhem, the anchors don’t always take themselves too seriously. Taking a break during the trial of Tammy Moorer, a woman on trial for kidnapping her husband’s lover (now presumed dead), an anchor announced, “When we come back, more of Moorer.”

On Tuesday afternoon, after a trial of some three weeks, climaxed by inadvisably taking the stand in her own defense, Moorer was found guilty. Still obstinate, she told the judge that her lawyers had botched the case -- and was subsequently sentenced to 30 years in prison.

Then it was back to the trial of a hitman hired by a woman to kill a dentist who was dating her former boyfriend. Or something like that. These cases can get confusing.

By Wednesday morning, having endured all the carnage, deadly love triangles and criminal conspiracies I could handle in one stretch, I turned off Law & Crime.

I’ll admit it: I plead guilty (pleasure) to finding the channel compelling.

But an unassailable case for viewing? The verdict is out.