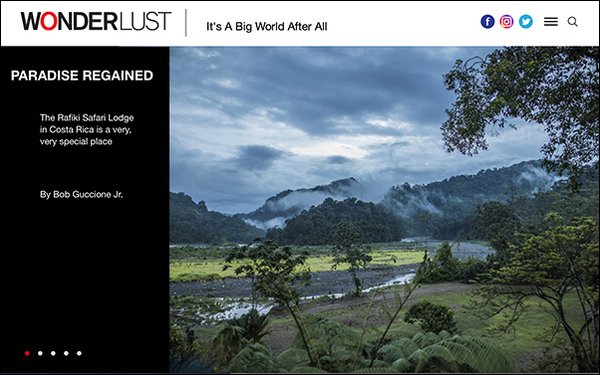 Wonderlust, the travel site created by Bob Guccione Jr., the former owner of Spin and Gear magazines, is rolling out a new look and offerings, including hubs for travel deals, books, ecommerce and a partnership with Element Productions to produce more video content and podcasts.

Wonderlust’s first year in operation “was about developing a personality” for the brand, Guccione told Publishers Daily.

After nearly a decade away from the magazine publishing business, Guccione’s efforts to run a pure-play digital outlet means building a social-media presence and battling search rankings to grab readers’ attention.

“It’s not just about being a media business anymore,” Guccione says. The majority of Wonderlust’s readers find the site through search, he adds.

Wonderlust has an intimate editorial team; a large part of the business is outsourced. He hopes to grow Wonderlust into a recognizable brand beyond media, akin to how Virgin Group properties stand out.

He wants to “establish the spirit of the brand" in the travel industry as a whole. “I can see franchising a chain of boutique hotels, especially in Asia, in the future,” he adds.

His motivation for the brand has always been to bring “optimism, wonder, romanticism and exoticism” to the travel industry.

Earlier this month, Wonderlust announced it was partnering with digital video production company Element to produce companion videos to the site’s feature stories. Digital publishing “can’t just be an article with an ad next to it. That model isn’t sufficient anymore,” Guccione said.

The first video from the partnership is an accompaniment to “Paradise Regained,” an article on Costa Rica’s Rafiki Safari Lodge (an ecotourism destination), created by Element director Craig Orsini.

Soon, Wonderlust will launch a hub with travel deals. The team plans to curate about seven deals weekly.

Wonderlust is also partnering with Raleigh and Drake as its first editorial publisher. It will provide editorial for the 19 million people its screens reach every month. Raleigh and Drake licenses travel recommendation content from Instagram influencers and other clients, which it distributes at airports and on planes.

In addition, Wonderlust wants to launch two or three podcasts next year, in partnership with Scout FM, the podcast distribution system for Alexa, Android and iOS. It has car radio system compatibility with Apple CarPlay and Android Auto.

One of the podcasts will be called “Travel Stories,” hosted by Guccione. Another will focus on food.

The Wonderlust site will also unveil “Objects of Desire,” an ecommerce hub where editors will curate products for readers. Items can range from luggage to furniture. Wonderlust will get commission from sales.

Its new features include “Loose Canon,” a list of the “100 greatest travel books ever written,” complete with synopses and a write-up on why each book was chosen.

The site is partnering with boutique travel agency Skylark to create “bespoke” trips for small groups of people, at “luxury” and “high-end” accommodations. Wonderlust will get a commission from any trips booked with Skylark through its site.

Guccione believes such partnerships and ecommerce revs will eventually make up a larger part of Wonderlust's revenue than digital advertising. Wonderlust does not sell programmatic advertising. “We are only taking really compatible advertising, from a small number of top advertisers,” Guccione said. American Express, MaCallan, Disney, Viking Cruises, Kate Spade, Seabourn Cruises and Saks are some of the advertisers on Wonderlust.

“Our strategy is counter-intuitive to programmatic — it’s too little money and our stuff isn't going to be sold that cheap,” Guccione said. “When editorial is reduced to a level of commodity, it doesn't have any value worth paying for.”

The site has recently brought together an impressive board of advisors, including Sarah Fay, the former CEO of advertising agencies Aegis and Digitas, and partner in AI investment fund Glasswing; and Philippe Guelton, CEO of SheKnows Media Albie Hecht Chief Content Officer of kids entertainment company Pocket.Watch.