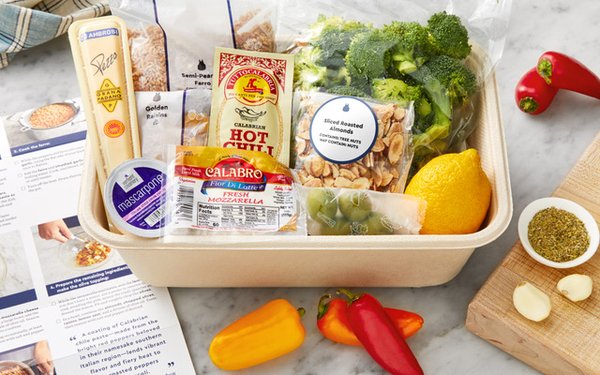 Blue Apron, the struggling meal-kit pioneer, is cooking up a new distribution plan, selling meal kits to busy New Yorkers through Jet.com. Jet, owned by Walmart, says it is the first time the meal kits are being sold through an e-commerce website. (Amazon has been busy testing its own meal kits for some time now.)

The meals, targeted at the millions of hungry households in the New York City area, will be delivered through Jet’s City Grocery program, the recently relaunched program that offers people three-hour scheduled delivery windows.

Meal kits come in four different varieties, specifically designed for the Jet customer, and priced from $17 for two servings of an Italian farro bowl to $23 for seared steaks & peperonata for two, with plans to rotate the menus every six weeks or so.

“We know, based on research, that weeknight dinners are a challenge, both from a time and inspiration perspective. With Blue Apron, we can offer a variety of recipes that allows Jet customers to cook at home in 30 minutes or less. By including the meals as part of our City Grocery offering, our customer can include them as part of their weekly grocery shop,” he tells Marketing Daily.

Blue Apron says the Jet deal represents another step forward in its channel expansion strategy. It recently began selling the kits at Costco, where consumers can buy them for about 30% less than it cost to subscribe. And it just launched on-demand delivery through GrubHub and Seamless.

The announcement comes at a tricky time. Blue Apron has already earned Bloomberg’s ignominious distinction of being the most disappointing initial public offering of the decade, and lost nearly a quarter of its customers in the most recent quarterly period, with the number of customers dropping 24% year-over-year, and 9% quarter-over-quarter. Revenues sank 25%. Shares are down about 70% since it went public last year.

Wall Street observers aren’t encouraged. Customers left Blue Apron because of “insufficient product offerings and more competition across the meal kit space,” writes Brian Nowak, an analyst who follows the company for Morgan Stanley. And while costs benefited somewhat by a 7% decrease in marketing spending, there isn’t much to be hopeful about, short term. “Management anticipates revenue to recover more slowly than originally anticipated,” he says.

But while experts are skeptical about subscription meal kits in the U.S., there is more optimism about their appeal when sold in stores. Walmart, which owns Jet, began selling Gobble meal kits online earlier this year. Purple Carrot, which makes vegan kits, now sells through Whole Foods Markets.

And Kroger, which had been testing its own meal kits, acquired Home Chef earlier this year and has just begun introducing the meal kits in select stores in Illinois, Kentucky, Michigan, Ohio and Wisconsin. Four varieties are available each week, with each kit serving two people. (Prices start at $8.50 a serving.) And it promises an even quicker version—with meals ready in 15 minutes—soon.

A new report from NPD Group says those in-store meal kits may well win back consumers who tried, and then ditched, subscriptions to a meal kit. Kits still provide a solution to busy consumers, saving them the trouble of figuring out what’s for dinner and providing everything they need.

“By 4:30 pm on a typical day, most U.S. consumers haven’t decided on their dinner meal yet,” writes Darren Seifer, NPD’s industry analyst. Retailers selling the kits “not only capture the last-minute deciders but also showcase themselves as meal solutions providers as opposed to places that merely sell products,” he writes, and its research finds that 53% of past-month meal kit users are experimenting with in-store kits.

Meal kits are getting a warmer reception outside the U.S. HelloFresh, based in Berlin, says it delivered 49 million meals to 1.84 million active customers around the world in its most recent quarter and says it is approaching the break-even point.