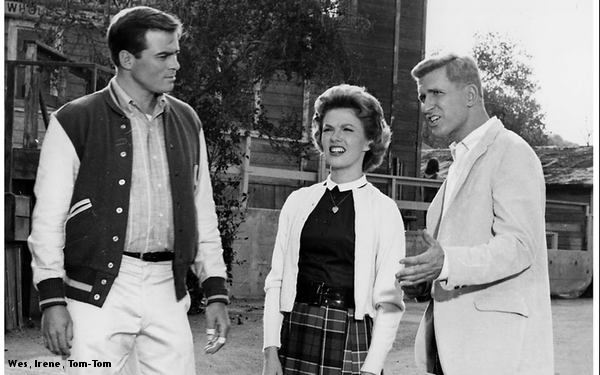 Ellison essentially called “It’s a Man’s World” one of the best series of the 1960s.

And no wonder. Ellison was writing as part of the no-holds-barred media world of the counterculture era. But the bars of TV had hardly been unlocked at all -- except perhaps for this one series that had briefly slipped through the chains several years before.

And particularly for one character -- a free-spirited college student named Tom-Tom, played frenetically by Ted Bessel several years before he hit it big as Marlo Thomas’ boyfriend on “That Girl.”

Tom-Tom is often heard railing against American conformity and consumerism -- especially concerning his roommate, the conservative Wes (Glenn Corbett, who a year later would replace George Maharis in “Route 66”) and Wes’ fiancée, the slightly repressed Irene (Jan Norris, who would tragically develop a brain aneurysm two years later at the age of 24.)

In one now-dated reference that required some math on my part, Tom-Tom tells Wes and Irene, “George Orwell didn’t predict this kind of robot behavior for another 20 years” (a reference to “1984,” then 22 years in the future and now 34 years in the past.)

One episode has a feminist tinge, several years before the eruption of the women’s lib movement. A working woman, played by Ellison’s future wife, Lory Patrick, berates Irene for just wanting to raise children and be a homemaker: “It just seems so selfish to settle down…in a quiet little corner and forget about the rest of the world.”

Patrick is excellent in her guest role, as is Norris -- who, episode after episode, delivers a nuanced performance worthy of some kind of posthumous honors (she died in 1985).

In fact, for a series with a title that emphasizes its male characters, the women on “It’s a Man’s World” more often than not steal the show.

Those women also include semi-regularAnn Schuyleras beatnicky Nora and, in the final outlier episode, Jeanine Cashell breaking out of an otherwise supporting role as a grocer’s teenage daughter, Alma Jean. A pre-“Gilligan’s Island” Dawn Wells shines in several episodes, including one where she dons, yes, a halter top.

Long before the term dramedy was coined, “It’s a Man’s World” was funny at times, sad at others -- but mostly just a slice of real life not otherwise depicted on TV shows running during the fall of 1962.

In an episode titled “The Beavers and the Otters,” Wes and Irene flirt with having premarital sex. Another episode, “Driving to Exeter,” teases us with a red-light district on the wrong side of the tracks. Tom calls Wes a “meathead” nine years before Archie Bunker would berate son-in-law Mike with that moniker on “All in the Family.”

The show is not only beautifully acted, but extremely well-written and directed. Each episode, some of which hardly involve Tom-Tom, Wes or Irene at all, is like a mini-movie. In one highly innovative move, show action continues to take place under opening and closing credits.

The driving force behind all of this -- in an anachronism, I’ll call him the showrunner -- was Schuyler’s future husband Peter Tewksbury, who had previously achieved massive success directing “Father Knows Best.” NBC’s cancellation of “It’s a Man’s World” after just 19 episodes led to a nationwide “Save the Show” campaign, Congressional hearings on the Nielsen ratings -- and contributed to Tewksbury eventually leaving Hollywood to become a cheesemaker in Vermont. (Jill Lepore wrote beautifully about his story – and relationship with an admiring J.D. Salinger -- in The New Yorker a couple of years ago.)

So in Tom-Tom’s words, “Free yourself from the chains of rigid conformity” and “revolt” against today’s TV by watching a truly revolutionary blast from the cancelled past. Thanks to the continuing wonders of YouTube, you can watch 17 of the 19 episodes for free on JoeyBoey’s channel. No, I have no idea who he is -- but he’s got great taste in TV shows.