'The Correspondent' Wants To Raise $2.5M From Memberships 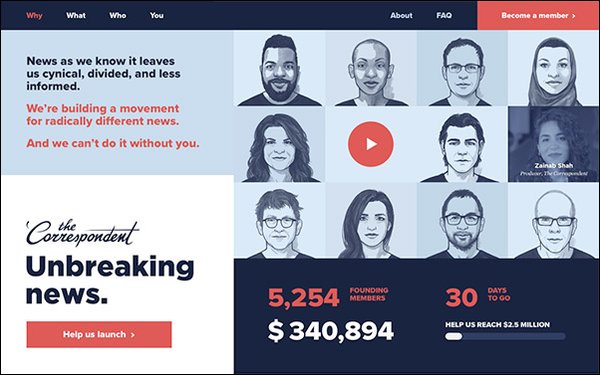 The reader-funded, Netherlands-based news site De Correspondentannounced in May that it had raised $1.8 million to help launch an English version of the Dutch site.

Now, the English-language version, The Correspondent has launched a membership campaign to raise $2.5 million in the next 30 days.

De Correspondent was formed in 2013 with a crowdfunding effort that raised $1.7 million from about 19,000 backers. The ad-free site now has 60,000 paying members. About 85% of its revenue comes from readers, memberships and events.

The English-language version of The Correspondent, based in New York, has a “pay what you will” program, similar to The Guardian’s model online. (The Guardian announced earlier this month it has 1 million supporters.)

The Correspondent has 20,000 members signed up for a newsletter.

In an email to subscribers, cofounders Rob Wijnberg and Ernst Pfauth urged readers to support the site because “news as we know it leaves us cynical, divided and less informed; news organizations prioritize the needs of advertisers over the needs of readers (that’s you!); and all-too-often, the news talks to you, rather than with you.”

Wijnberg and Pfauth market The Correspondent as an “antidote to the daily news grind.”

“The Correspondent wants to redefine what news is about, shifting the focus from the sensational to the foundational,” it says on the website. “We don’t cover the weather, we cover the climate, informing you about how the world really works.”

Just this week, a number of publishers have asked readers to pay for online content: New York Media, Quartz and  Yahoo Finance all put up paywalls.
europe, funding, online publishing
Next story loading