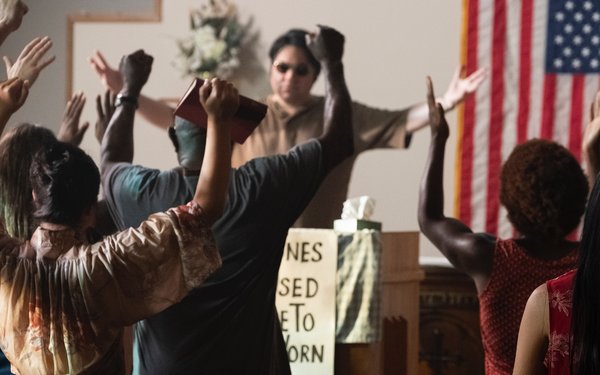 This weekend marks the 40th anniversary of the Jonestown Massacre, which I had always thought of as just 900 or so cultists “drinking the Kool-Aid” in a crazy suicide pact.

That’s until I previewed Sundance TV’s “Jonestown: Terror in the Jungle,”an ambitious, powerful -- and surprisingly timely -- four-part documentary airing over two nights this Saturday and Sunday at 9 pm ET.

“Terror” in the title makes sense, both because Jonestown’s 910 deaths marked the greatest loss of American civilian lives in any incident until the terror attacks of 9/11, and because Pastor Jim Jones was, at his core, a terrorist.

He was also an egomaniac, a demagogue, and a habitual liar, who lusted after power, peddled conspiracy theories, craved adulation by his followers, and valued loyalty over all else.

This cautionary tale about the dangers of enabling charismatic leaders and following them blindly is told largely by former members of Jones’ church, the Peoples Temple of the Disciples of Christ, including two of his adopted sons.

One of those former members -- but let’s call them survivors -- forms the emotional center of the documentary’s narrative.

Grace Stoen fled Jones’ oppression while Peoples Temple was still based in San Francisco, but had to leave her young child behind because Jones claimed him as, essentially, communal property.

Stoen became more and more worried when Jones found property in South America’s Guyana, built Jonestown far from any other civilization, and brought his followers there en masse.

“My son was being turned against me,” she recalls. “That’s when I decided to fight for [him].”

First, she sued Jones for custody. Although an arrest order was initially issued, the Guyanese government dropped the charges.

Stoen then joined up with a group called “Concerned Parents,” which led to California Congressman Leo Ryan deciding to visit Jonestown on a fact-finding trip. “I tried to warn Congressman Ryan,” Stoen remembers.

Does Stoen get her child back? Does Congressman Ryan, like Speier, survive? If you’re too young to remember, or if you never paid attention to anything but the Kool-Aid jokes at the time, this makes for riveting, edge-of-your-seat suspense.

But back to that notion of a suicide pact. Many of the victims are injected with poison against their will. Others have had it drilled into their minds by their paranoid leader that the Guyanese army is about to massacre them, so it would be better to end their lives on their own terms. “Revolutionary suicide,” in Jones’ words.

The pastor runs an audio recorder throughout the massacre, so you can hear the agonizing screams of his flock as they’re dying. It reminds me of the sounds of Nazi atrocities.

Referring to the masses of bodies lying on the ground in the massacre’s wake, one commentator declares, “Shades of Auschwitz.”

And I flash to Germans saying they were “only following orders.”

“I look at the world today and I see parallels,” warns another survivor. She notes that Peoples Temple began in a time of “sociopolitical change that was also based on fear. We are in the same type of environment, if not worse, that can generate something much, much more dangerous than Jonestown.”

In the film, Congressman Ryan is shown speaking at a Jonestown gathering in front of a large sign. It warns the soon-to-be-massacred: “Those Who Do Not Remember the Past are Condemned to Repeat It.”