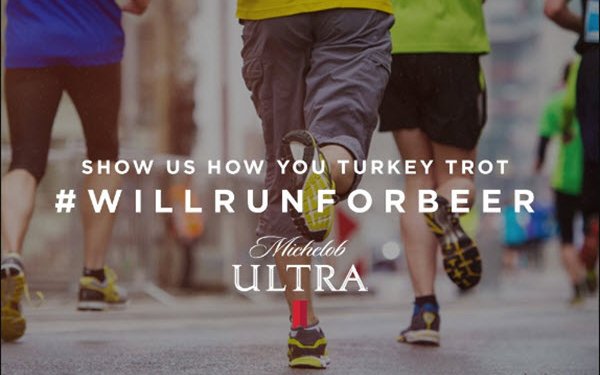 Michelob Ultra is marking “one of the most gluttonous days of the year” by rewarding intrepid types who participate in Thanksgiving Day foot races with free beer.

That might come off as contradictory, were it not for Michelob Ultra’s brand message: With just 95 calories and 2.6 carbs, it’s the beer for people who believe in being “both fit and fun.”

According to the brand, the T-Day racing trend has developed real legs: About 1 million people now participate in about 1,300 races across the country.

To qualify for the turkey trot offer, starting on Nov. 22, consumers age 21 and over in select U.S. markets are instructed to follow @MichelobULTRA on Twitter or Instagram and share a photo of themselves racing, using #WillRunForBeer and the tag @MichelobULTRA.

According to the rules on the promotion’s site, residents of Arizona, Colorado, Washington, D.C., Florida, Illinois, Louisiana and New York who participate will receive a $10 credit to buy the beer on Drizly.com, and residents of Indiana, Massachusetts, North Carolina, New Jersey and Washington will receive $5 Drizly credits.