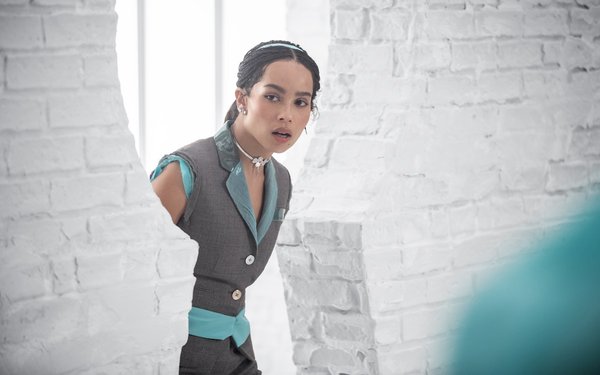 Tiffany & Co. is launching a holiday campaign that takes viewers on a surreal "Alice in Wonderland" inspired journey featuring a star-studded cast.

The effort, from creative agency Laird + Partners for Tiffany & Co., includes actress/model Zoë Kravitz and model Naomi Campbell, along with the 1973 hit song “Dream On” by Aerosmith.

The 60-second video was directed by Mark Romanek, most recently known for creating Beyoncé’s “Lemonade.”

The latest chapter of the “Believe in Dreams” campaign opens at Tiffany & Co.’s iconic Fifth Avenue flagship store, where Kravitz stars as a saleswoman working late into the evening. Kravitz is drawn from reality into a Tiffany Blue dreamscape.

At the heart of this whimsical wonderland is an underground holiday workshop staffed by craftspeople, with a quirky manager played by model Xiao Wen Ju. The exquisite workmanship and masterful artistry of Tiffany & Co. are brought to life in a series of witty vignettes with cameos from models Karen Elson and Maye Musk.

The journey culminates in a “madcap tea party” hosted by Campbell, featuring a selection of pastries from The Blue Box Cafe and housewares and table settings from the home and accessories collection.

To coincide with the craftsmanship theme for the holiday, the Tiffany New York flagship store will feature an actual workshop housing jewelers, stone setters and engravers. It will be on display until Jan. 1.

“The holiday season is a time of year when more than ever, we’re inspired to dream,” said Reed Krakoff, chief artistic officer, Tiffany & Co., in a release.