'Scrubs' Fans Get A Reunion, But Reboot Is Less Likely 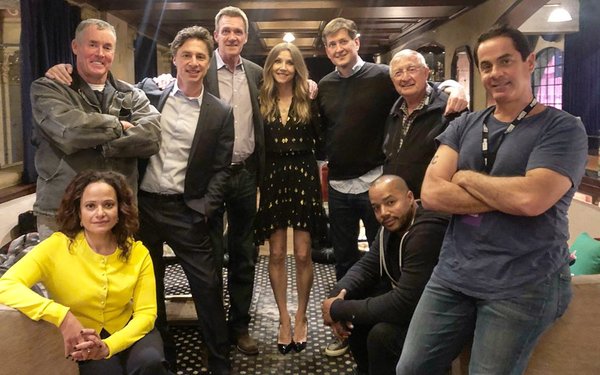 With “Scrubs” now off the air for eight years — the same length of time as its original run — the medical dramedy’s main cast and showrunner reunited for the first time ever at the recent Vulture Festival in Los Angeles.

Were they there to promote a reboot? A new 8K restoration? A coffee table book?

No, they got together simply to enjoy each other -- and to pay back the show’s extremely loyal fans, who packed the audience.

So did some of the show’s supporting cast, whose characters were as finely developed as those of the eight actors who graced the Vulture Fest stage, according to Lawrence. One member of that supporting cast, Rob Maschio, even popped out of the audience — decked out in full medical scrubs — to tell fans that “You’re just a little bit better than everyone else.”

Being “better” back in the day could be a chore. As Lawrence pointed out, “Scrubs” fans were forced to follow the show “from time slot to time slot, year to year.”

“Scrubs,” you see, was never a huge hit. It plodded along year after year, thanks to the fervor of those loyalists.

When NBC canceled “Scrubs” after seven seasons and 12 different time slots, ABC -- whose sister production unit had been producing the series -- picked it up.

After the show’s finale  (one of the greatest ever, btw)  aired a year later, ABC surprisingly renewed the series yet again.

By then, most of the cast had already committed to moving on, and the show’s reincarnation in a different locale with several new faces and even a new title, ”Scrubs: The Interns,” lasted just 13 episodes.

Should there be a reboot? Remember that the show was just a cult hit to begin with, so how much interest would there really be outside of the existing fanbase?

Although star Zach Braff tweeted the photo above, with the headline “Season 10,” Lawrence said the cast doesn’t need the money (was that a dig at such original cast reboots as “The Conners,” “Fuller House” and “Murphy Brown?”). “So the only reason to do it would be for you guys [the fans] and to enjoy the time together….If we ever do it, we'll do it as a short little movie or something like that.”

Hey, isn’t that how the “Will & Grace” reboot began?